Legacy Of Emptiness (Nor) “Over The Past” 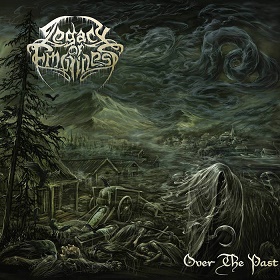 Well … Legacy Of Emptiness from Norway with their last album “Over The Past”. It took some time to compose. It started in 2013 and only saw the green light, that is, its completion in 2017 … If it was worth your “delay”? Well … We’ll see … I remember when I first heard two songs from this album, I got the idea, “Hmmm … Symphonic Black Metal, and it’s melodic …” But nevertheless these two songs managed to captivate my ears. Strange, because I’m not a big fan of this musical genre. Nothing against, it just does not tell me anything. However I decided to “bet” a little and I arranged the Digipack of this band. Released by Swedish label Black Lion Records. It was worth it to be honest. It’s not exaggerated the symphonic part during the whole album, at least in my opinion. Voice is a little skipping (in a good way) by Black Metal and Death Metal (More related to what many are accustomed to hear, in the wave of Swedish Melodic Death Metal bands). What it does, however, does not become “cloying” listening. “Despair” “Into The Eternal Pits Of Nothingness” or even “Four Hundread Years” are examples that the Black / Death mix is ​​very well made and the symphonic part is not exaggerated and which can even be well made and balanced. It even manages to bring a certain weight to the songs. I hope it has helped in choosing a future album to be bought by those who are reading this review, and who knows can advise a friend. If I advise the person outside the musical genre mentioned above? Only, and only if it is not “Traditional” one. To finish. Listen to the song “Transition” that despite being instrumental, its composition is very good. 7.5 / 10 By Me, Myself & I

The Riffs Must Flow – VI