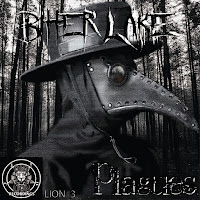 Well … I received this promo from Old Lion Recordings and was even a little curious to listen to it, after having been researching the band a few days before (on Twitter). “Plagues” is the name of this release of the band Bitter Lake. But let’s start with the band name. There are two options for this name from this band from Scotland. A name of a lake that exists near Seattle, or (and I think it is from here that the name was used) of a film realized by the English film-maker Adam Curtis  (I looked for info about this and it seemed very interesting. It’s one of the things I’m gonna see). Speaking now of the sound of the band … This work is divided into six songs. All of them related to Black Metal, of that I have no doubt, but … There is a very present aspect here in all of them. An industrial and even (sometimes) electronic. In the first song of this work “Deadman’s Switch” noted well the presence of industrial sound giving a different ambient sound. It even reminded me a little of the Norwegian band The Kovenant (and something that is found throughout this work). The second song of “Plagues” begins with an “intro” and then enters the “chaotic” part, the music itself is always a mixture of ambient sound and the chaotic part. Well done by the way. “Inhaling Chaos” the third song … In my opinion the most Black Metal music of this work, despite appearing a quieter part through the middle of the music, but always with a bit of the mixed industrial part. The best song of this work appears in fourth place. “Nature Kicks Back”, at least that’s my opinion. A very powerful riff throughout the song and with a well made mix of “sounds” that makes the listening very good. “Plagues” the fifth song of this work and the one that gives the name to this work, perhaps the most “chaotic” music of this work, and a little repetitive, attention, in the good sense. It did remind some of the older industrial bands that have a powerful rhythm and basically “walk” around it, during the whole song adding sounds and melodies. Of those rhythms / riffs that make the head shake. I like … And … “Inhaling Chaos (Grimbit Remix)” the last song … A remix, yes … That’s right … And here is the most electronic part of the band, a lot of “beat”, a lot of electronic sound … This music I will not prolong my words much because it is a sound that passes me a little and I have no knowledge, and as such I will not comment on such. Concerning the whole work of this Scottish band. For those who are curious in music and not a “Traditional” I advise the listening, for those who are not … You lose a band that can be interesting in many ways. One last point … Better production could give a lot more weight to this work. 7/10 By Me, Myself & I

The Riffs Must Flow – I