Thy Serpent’s Cult “Supremacy Of Chaos” 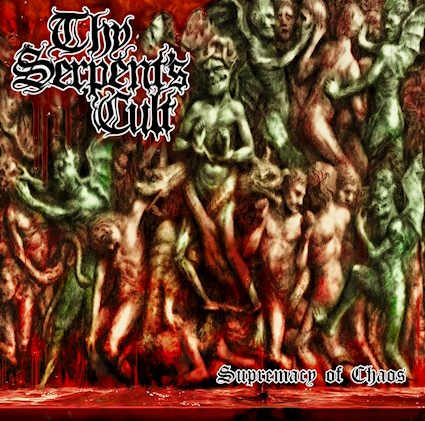 On October 27th, Ordo MCM is proud to present the third and final album of Thy Serpent’s Cult, Supremacy of Chaos.

Hailing from the cult metal hotbed of Chile, Thy Serpent’s Cult have been a veritable force of nature for nearly 10 years. Forming in 2008 and now gracefully bowing out on a high note, the quartet have skillfully crafted a scorching firestorm of a sound lo these many years, marrying the sulfurous atmosphere of ancient South American black metal to the jackhammering militancy of classic Krisiun, Deicide, and Angelcorpse. Thy Serpent’s Cult released their second album in 2014 under the banner of Ordo MCM. Fittingly titled Sedition, Sorcery and Blasphemy, it was a whirlwind of darkness and dread, and was suitably hailed in the underground.

But now, sensing the end was nigh, Thy Serpent’s Cult unleash their foulest and most dread energies with Supremacy of Chaos. Once again fittingly titled, Supremacy of Chaos reaps a hellish harvest of tornado-torn death metal, deeply and diabolically suffused with a tangibly occult aura. Here, Thy Serpent’s Cult span all their trademark traits – martial surge, swirling vortex, boiling pressure – and send them deeper into the bowels of Hell. The title Supremacy of Chaos is telling, in that the band do indeed hail the supreme powers of chaos; and yet, in other ways, their songwriting is strict and finessed and hardly a chaotic thing. Nevertheless, with a production that ably balances the blood-red raw and robustly professional, Thy Serpent’s Cult smother the senses with their overwhelming onslaught, thereby instilling a sensation of imminent chaos.

And as its last notes ring out, Supremacy of Chaos seals the coffin on Thy Serpent’s Cult and preserves a legacy that will remain untarnished. Hail the old gods!