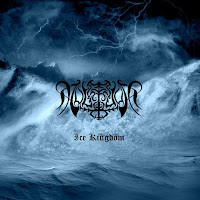 Well well … Of all the information I’ve been able to collect and where I’ve been, I’ve always read that this band played, Black Metal. Yeah yeah… Only if it was in the past. But here in this album? Black Metal has nothing. The riffs used, the way the songs are made and elaborated. Even the distortion used on the guitars used throughout the album, has nothing to do with Black Metal (here I am referring to the typical sound of Black Metal, where the guitars have a normally sharp distortion). But… Very good songs I found. The lyrical content of the band? Well, I do not know if I’ll be right, but due to the theme of the songs, I will say that they should be on the theme “Heathen”. Of all the songs, I can advise “Ice Kingdom”, “Way to Valhalla” and “Immortality”. Very good and an excellent sample of good riffs and good Death Metal. But there is a song on this album that for me is very, very good. “Rise of the Blade”. Here yes, I already noticed something, that I can say, HERE IS BLACK METAL (I also found small pieces in the song “Memory of Ancients”). ahahahahahah. Yes, here we can see the influences of Black Metal, they must be the “remnants” of the band’s past. This song managed to draw even more attention to my ears while my stereo played and played many more times (exactly the same as the other songs on this album). Last words … I did not know the band, I got to know them, I liked the album, EVERYTHING, and I inform that it will be an album that I will listen to more times. Almost certainly. (Molphar (from what I discovered) is a sorcerer in Carpathian folklore). 7.5/10 By Me, Myself & I

Blindeath “Reborn from the Shadows”