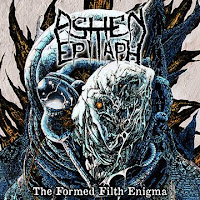 With having a few Ep’s and three full length albums to date, this is the newest and recent release from Ashen Epitaph titled, “The Formed Filth Enigma.” This album combines old school styles of American death metal with European influences and has subtle hints of a blackened nature.
The guitars have that punchy, crisp sound that is just unrelenting through out, from catchy, choppy, palm muted chugging, to triplet picking, to all out fast speed picking with superb harmonies and melodic leads. On occasion there are also fast ripping solos that sound like the styles of Trey Azagthoth from the older Morbid Angel era. Mid range growling vocals are used for the most part here, with the odd high-end screams emphasizing on secondary vocal parts. All this is backed by solid steady drumming with traditional death metal styles using mid tempo down beats, to fast snare hits in the older blast styles of the later 80’s & early 90’s. Although the drums never really blast right out, like in the more modern styles of death metal, it isn’t really needed either as the whole process here is very effective and well written. 8.5/10 By Wolven Deadsoul