Come Back from The Dead “Caro Data Vermibus” 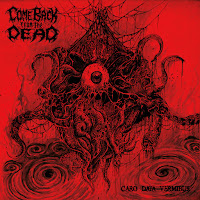 Band: Come Back from The Dead
Title: Caro Data Vermibus
Label: Transcending Obscurity Records (September 30th, 2017) (CD) /Mono Canibal Records (June 9th, 2017) (10″)
Date: October 6, 2017
Country: Spain
This new EP takes me back to a vision of greatness with all the best elements of old school death metal and like revisiting the 1990 era again but with a modern sound. I can’t help but hear the musical influences of the likes of old Entombed and Autopsy, especially in relation to the use of heavy rhythmic chords, the sick horror style harmonies applied and the blistering solos ringing out, almost in a very dark bluesy sense. Drumming wise, we have the classic D-beats going on, a single kick drum predominately leading throughout, to off-beat snare hits in the slower parts and older style blast beats that burst out periodically. Like following the rest of the musical direction here, the vocals are in a screaming aggressive mid range area and do have a bit of a resemblance to the older styles of Lars Petrov of early Entombed. Overall, I have no complaints here but four songs go by fast until I am replaying this again and I wanting to hear more! Long live the rotten corpse of filth, stench, worm ridden, ripping death and hell fire where no one gets out alive and old school death metal reigns supreme! 8/10 By Wolven Deadsoul

Maestitium – Tale of the Endless