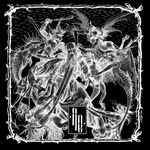 We certainly have some varying elements here for the upcoming debut release by Nihil Eyes “Black Path.” To say they are just a death metal and grind core based band, I find that a bit limiting and not entirely accurate either. From song to song when listening to this obscure offering, there are variations of musical styles and approach which cover influences ranging from thrash, to doom, to melodic, and yes death metal of course too. However, one can also sense that there is definitely some sort of haunting darkness looming underneath all of this as well. This in turn creates the unexpected elements of being divergent and surprising which together held my attention and made me listen further. With song titles like, “Burn the Leech,” “True Nihilist,” and “Treachery and Id,” there seems to be some deep seeded psychological perspectives going on which tap into the human psyche putting forth the reflections and dementia of the world of today. If something like this can provoke thought, or question or even awaken the consciousness of a doomed planet bursting at the seems, being backed with solid extreme quality metal of varying sorts, then I feel this has accomplished something! Why has nobody signed these lads yet??? 9/10 By Wolven Deadsoul