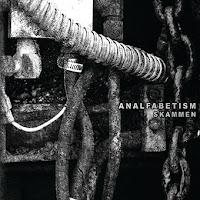 Analfabetism … Well … Maybe I even “suffer” it … At the musical level … Very sincerely there is so much that appears in these days and in absurd amounts that it will be extremely difficult to follow, even if it is dedicated to a unique musical style. Even worse for me, I like a lot of musical styles. So yes, I will be a true illiterate in the music … But … Does the name of the band mean this or one of the other aspects of Analfabetism? The one in which you can not understand things as simple as they are? Hmmmm … Let’s talk about music … I was completely unaware of this band, or rather this project, because it is composed of one person, Fredrik Djurfeldt. Many thanks Malignant Records. Dark ambient is what is heard in this work. Very good by the way. But listening to this work noticed that there was something different, something that was not so abrasive, something that could create a dense atmosphere, some loops that passed and create an environment, I will say a little obscure and with the feeling that humanity is over and you are to live the remnants of the end of existence. As I am a little bit lazy in this musical style (I’m not ashamed to say it: P and because I’ve only listened to this genre more assiduously +/- since 2015) but I found something different and went to search. I discovered that the sounds, the atmosphere, the lack of certain sounds, was a musical subgenre. Death Industrial (go and search). So after many, many times, I have listened to this release, rediscover new sounds, loops, sound effects, sounds that sometimes resembled an explosion mixed with the sounds of machines that react to nuclear radiation, mechanical beats, etc. I can say that this project is a very good job of Dark Ambient influenced by Death Industrial. If there is anything better than Analfabetism? Tchhhh … I do not know. But I liked this album. “Skammen” will be something I will listen to more often. 8/10 The Key Keeper

The fourth pressing is ltd. to 300 copies worldwide 👇