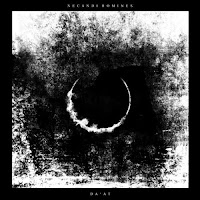 Focus and direction are two qualities that often are taken for granted. It’s easy to lose sight of them when they are present in a record, but when they aren’t there it becomes a glaring omission and the entire work suffers. Unfortunately, Necandi Homines are missing both on their debut full length, Da’at. The black/doom outfit attempts to rely on ambiance and movements to carry their songs, but it comes off as stale and disjointed. The entire first track (“Memento”) is eight minutes of choral mood-setting that, used as an intro, could be cut down by six minutes and still serve the same purpose. There is no payoff, as the first track fizzles out into another meandering build-up on “The Faceless Sculpture”. When the track climaxes, it plateaus and fails to progress, instead dropping off into more atmospheric “mood-building” that fails to evoke much of anything besides waiting for the next track to start. The waiting continues throughout “The Fifth Dimension”, another atmospheric track of mostly bass and drums, until “The Ocean After the Storm” comes in. This is the first track with any real meat on the bones, the drums do a good job of driving the song forward, and it actually feels like there is a purpose here. The vocals, evoke desperation and despair amidst the strummed chord progressions before again dropping into what is the saving grace of the record: the seventeen minute climax track, “Through Deep Waters.” It feels as though this song has purpose, the transitions between movements are smoother and the builds actually have payoff. Atmosphere is finally achieved. The female vocals are extremely well executed and fit right in, they serve as a highlight of the entire album, followed by the best passage Necandi Homines offers on the album. Had this track alone been perhaps released as an EP, the band would have left a much stronger impression, but it’s almost too late at this point. 3/10 By d00mfr0gg