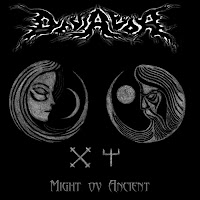 Band: Deviator
Title: Might ov Ancient
Label: Vacula Productions / Kundalini Records
Release date: October 31, 2016
Country: Ukraine
Might ov Ancient, the 2016 offering from Ukrainian black/doom outfit Deviator, is actually a compilation of sorts. The first three tracks are from their 2015 EP, Thy Immortal Majesty, and track five is a re-recording of a track from the Відчуження demo, originally released in 2008. The record feels like a complete work, however, weaving doomy passages in a thick atmosphere of dread. The drums serve their purpose, and despite being programmed, don’t suffer from the usual “over-mechanized” feel commonly associated with drum machines. While they lack the human, organic element of a live drummer, it almost adds to the coldness of the record. The guitar work is a bit sparse in the beginning of the record, but really picks up by track three, “Thy Immortal Majesty”. The song moves between slower, atmosphereic sections to panicked, almost black/death sections that make the song a highlight of the record. “The Inner Self” is an ambient track that is servicable enough, yet on a release that only clocks in at a half hour to have five minutes devoted soley to amience comes across as mostly filler. The final track is another album highlight, a more mid-tempo black metal song that, despite starting out sounding like “So Happy Together” by the Turtles, drops into frantic lo-fi glory. The razor-thin riffs work well over the synths, creating a triumphant feel amongst the darkness. The choice to keep the lyrics in Deviator’s native tongue pays off as well; they feel honest and dripping in hatred. Overall the record is good and garners several listens, but doesn’t have enough memorable moments across five songs to fully carry its own. (6/10) By d00mfr0gg
Band
Bandcamp
Facebook
Website
Label
Facebook
Bandcamp
(Visited 25 times, 1 visits today)
15/10/2017
Previous Post Next Post

Uthullun – Dirges for the Void