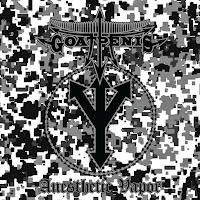 
Goatpenis, black/death veterans from Santa Catatina, Brazil, march forth with their 2017 offering, Anesthetic Vapors. After the expected intro of war drums beating and an ominous voice promising “nuclear devastation”, the bad gets right into it with some of the sonic bombardment that one would expect from any band in the genre. However, it is surprisingly melodic. Unlike a majority of their peers, Goatpenis aren’t afraid of bringing their guitars into the higher register and really letting their black metal side shine. The riffs are catchy, the alternating deep, death metal vocals constrast will with the more blackened shreeks that cut through from time to time. The rhtyhm section locks into grooves between blast-beat assaults and provides a solid backbone for the furious riffing that doesn’t let up for the entire record.
Suprisingly, the two biggest highlights come at the end of the album. “Oppressive Ferric Noise” is basically the best of all the aforementioned qualities of the album, it’s just so well done that it deserves a mention. “Pleasant Atrocities March” is the most surprising, especially for a final track. The riff sounds straight out of the Finnish black metal scene, instantly drawing comparisons to Satanic Warmaster or Goatmoon. Goatpenis adapt it well into their sound, ending Anesthetic Vapors with a march into victory. Overall, the album is extrememly well-executed. Those looking for a war metal release may be a bit disappointed in its clean production and melodic tendencies, this definitely feels more like a blackened death metal album than proper war metal. In fact, this might be the perfect album for someone just looking to dip their toes into the subgenre, and between Anesthetic Vapors and Weregoat’s surprisingly accessible release earlier this year, I wonder if war metal is starting to try to become accessible. Melodic war metal? Blasphemy, I know! (Pun always intended). 8/10 By d00mfr0gg
Band
Facebook
Label
Facebook
Website
Instagram
Bandcamp
(Visited 118 times, 1 visits today)
30/10/2017
Previous Post Next Post

And Now The Owls Are Smiling – The Comforting Grip of Misery