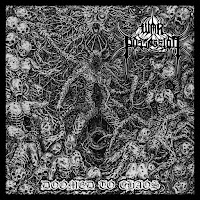 Band: War Possession
Title: Doomed to Chaos
Label: Memento Mori
Release Date: October 23, 2017
Country: Greece
Hailing from Greece, War Possession began in 2008. “Doomed to Chaos” is their first full length besides already having a split, an EP and a demo. There is definitely a 1990’s death metal vibe going on here that captures the great old school elements. For example, the use of classic song intros of a melancholy nature with either heavy doom ridden chords ringing out or single tremolo picking that draws the listener into this sense of darkness. Plus, with filthy distorted guitar tones and added gloomy leads that bring out the feelings of torment, along with a combination of pulverizing blast beats enforcing the brutality, to slow paced beats hammering down sporadically while the drum kicks flow fast, to the more mid paced use of classic death metal beats which carry all in between giving this 10-song album some varying extremes within. The vocals are in a guttural low depth range with reverb and sometimes a delay in effect which creates a sound similar to some of the older style Finnish death metal bands. Overall this album gives a powerful and raging flow living up to the album’s title and even though the recording sounds slightly in the distance, it still creates a worthy impact and great representation of what quality death metal should be. 8/10 By Wolven Deadsoul
Band
Facebook
Myspace
Label
Website
Facebook
(Visited 110 times, 1 visits today)
30/10/2017
Previous Post Next Post

Kaleikr – A Heart of Lead

I felt captivated since the first listen, this is

With the band having released their excellent late

Already Tuesday again, and in case you hadn’t ca

More raw, infernal and furious at the beginning of

Out now, “The Reaper is Calling” is the powerf

Today, we are going to check out a debut album fro

Shhhh… can you hear that rumble? It’s not a me

Surely there is no rest for the wicket as our writ

Today’s focus is on the innovative, solo, avant-

@dissentience 🇺🇸 on the ‘Anatomy’ of Mel

...you probably know what day it is and which two of our writers are back at it once again with this week´s #BAZUndergroundUpdates CXVI
by @JuliaKatrine & @BoatmanTom
#WeAreBlessedAltarZine
#TheZineSupportingTheUnderground https://www.blessedaltarzine.com/2022/06/28/bazundergroundupdates-cxvi/