Ensepulcher “No Sanctity in Death” 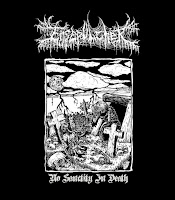 Well let’s fire up the buzz saws on full blast and dig up some corpses and time travel back to 1989! “No Sanctity in Death” is the 2017 debut and demo by Ensepulcher which contains 4 tracks of old school death metal worship resembling a sound and style comparable to the likes of the older Carnage and Entombed. This all begins with an Intro conjoined with No Sanctity in Death (title track) that interestingly enough sounds quite similar to the start of Left Hand Path by Entombed. The songs range from about 1.5 minutes to less then 2.5 minutes in total length with mid paced tempos and d-beats holding sway predominately throughout. Besides the guitars possessing the classic heavy (HM-2) buzz saw tone common with the old school nature, the vocals growl and scream out in a low guttural style finishing the touches on this analogue offering. The truth is this is nothing new or unheard of before as it is an example of revivalism with obvious influences. However, when almost 30 years after the fact a band does this, then to me its because they not only want to but they have a great admiration for the old school death metal sound and style. This demo is definitely a decent beginning but it will be interesting to hear future material from Ensepulcher and if they do develop more onto their own sound. 7/10 By Wolven Deadsoul
Band
FacebookBandcamp

Ævangelist – Matricide in The Temple of Omega