Hellripper is a one-man black/thrash project out of Aberdeen, Scotland that has been generating some buzz around the release of the debut album, Coagulating Darkness. A fast-paced frenzy of speed metal charred over the fires of hell, it has been a favorite release of mine this year. I recently had the privilege of catching up with the mastermind behind the project, James McBain about the recording of the album, his influences, and his many other active projects.
What is your writing and recording process like? Do you typically go to record with fully realized songs or hash them out as you go?
When I start recording, everything has already been written out in guitarpro so that a MIDI version of the song exists before any recording takes place. This helps me a lot as it gives me a good idea of how the final product will sound. Of course, I add things during the recording process and add vocals etc. 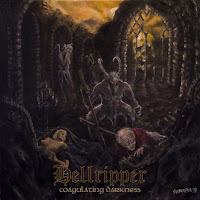 Why do you choose to keep Hellripper a one-man project? I see you’ve played some local shows live before, any chance of a touring outfit?
At the moment, it’s convenient to record by myself at home. Less time consuming, no deadlines, minimal cost and I can learn new things about recording as I go haha. We have played a few local shows and just recently played at ‘Old Grave Fest’ in Romania along with bands like Necrophobic and Blackevil which was amazing. There is a full live line-up now and we are looking to play live as much as possible.
The guitar work on Coagulating Darkness is top notch, is the guitar your “native” instrument?
It’s my only instrument haha. I’m glad you like the playing. I’m more of a rhythm guitarist than a lead guitarist which is why there is more focus on riffs as opposed to solos. I do play bass but it’s not advanced stuff and basically mimics the guitar parts most of the time.
The drums on the album sound live, are they all recorded that way or is there any programming involved?
Completely programmed. I’m useless at playing drums so it’s easier that way. I’m very happy with how it sounds so the fact that the drums aren’t live doesn’t bother me.
You have previously revealed that, among others, your parents are on the new album. Did your interest in metal (or music as a whole) come from them? And if not, how did you discover metal?
They did. They performed some backing vocals on one of the songs. My Dad is into old rock music like AC/DC and The Eagles so I guess that helped. But I think I got into metal just by hearing stuff on TV or by coming across it on the internet. I’ve always liked rock music and I think I just gradually started to like heavier stuff. Metallica and Megadeth were probably the first metal bands I liked and the first two metal albums I purchased were …And Justice For All and Peace Sells… but Who’s Buyin‘. Still my favourite albums from both bands.
What are some of your biggest influences, aside from the obvious picks (Bathory, Venom, etc)?
Bathory’s first album, first three Venom albums, Sabbat [JPN], Toxic Holocaust, Midnight, Enforcer, Darkthrone, TANK, Metallica, Megadeth, Mercyful Fate, Kreator, Sodom, Motley Crue.
That’s just some off the top of my head. The list goes on and on. 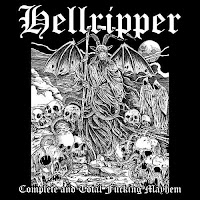 I know several of your releases (including Coagulating Darkness) are available on cassette. How do you feel about the tape “resurgence” that seems to have been occurring the past few years? Is this a medium you yourself enjoy or prefer?

I am a CD person myself. Probably just because I grew up with that as the primary format. I do like tapes as you get the analogue sound, but for convenience it’s CD for me.
How is the underground scene in Aberdeen and Scotland as a whole?
It’s picking up quite a bit in Aberdeen. It’s been quite difficult for the past year or so as our main venue closed down so we have been forced to find alternatives. I couldn’t tell you about the Scottish scene overall as I haven’t really been involved in anything other than the local Aberdeen scene.
You seem to be a busy man, any of your other projects you’d like to plug (I’ve dipped into Lord Rot, that EP is a delicious slice of brutality!)
Thank you for that! I’ll plug Lock Howl, another one-man project and Rats of Reality. Lock Howl is a post-punk/metal project of mine that sounds somewhere in between Type O Negative and Beastmilk with a mixture of clean and harsh vocals and a whole lotta reverb. I released the debut album Pareidoliaearlier this year. Rats of Reality is a 3-piece band that plays some sort of crusty black metal and draws influence from a bunch of different stuff from Celtic Frost to Converge to Oathbreaker to Darkthrone. We have 3 EP’s released so far.
2017 is coming to a close and has been a great year for metal. Any new releases you’ve been enjoying?
There’s a few cool ones. I’m really enjoying the new Grave Pleasures, Warbringer, Lich King, Trivium, The Black Dahlia Murder and Blackevil albums. There’s probably a whole lot more but again, off the top of my head. 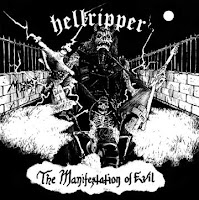 What does the future hold for Hellripper? For your other projects? Any details on your upcoming releases?
I have 4 planned split releases for Hellripper to be released over the next year. The first of which is also includes Wasteland Riders, Nightrider and Dulvel. I won’t go into detail on the others yet. I also have a plan for the next album which is quite a long way from being finished but it will be a concept album. That should be released in 2019 I imagine. Other than all that, Hellripper will be playing shows throughout 2018 so that should be cool!
A split between Lord Rot and VHS is nearing completion too so that should be out in the near future…
——      ——      ——
Interview by: d00mfr0gg

Interviwer note: Needless to say, I am excited to hear four new releases from this project alone in the coming year. To stream/purchase Coagulating Darkness, follow the link below, proceeded by links to Lord Rot, Lock Howl, and Rats of Reality. Support underground metal! -d00mfr0gg