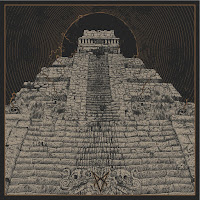 When I received this promo I was thrilled to be able to listen this band again, something that I did not do for a long time … Hmmmmmm … Now there’s a mix of Black Death Metal?!?!? At least that sounds in my ears. It’s different … Ok I agree and I admit that it has been a long time since I listened to this band and unfortunately I have not followed their discography but … In the demos were much more Black Metal, or rather I say, they were Black Metal and very good by the way. I will not say that it is worse because I find very good riffs that fill my ears, but I was expecting something I was used to. There are some very good riffs as I said, a very well done atmosphere, a cavernous sound that went very well into my ears, but I continue with that feeling that they were “more” Black Metal than the “idea / entity” I always I associate this band is “lost” and is sounding like many and many bands that in this vague (fashion), of Trves Black Death Metal. It’s not bad, no, it’s not, but … Very honestly, I do not have and I do not know what to write about in this review because I’ve been waiting for one thing and heard another that I even feel a bit “lost” in my vocabulary / writing. I leave to you the hearing and draw your conclusions and I will not give any rating …? / 10 The Key Keeper