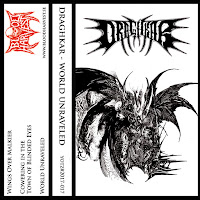 Draghkar formed in 2016 and “World Unraveled” is their debut 3 song demo which has been released on cassette on two different labels so far. With hearing out this demo one can notice the American style death metal influences of the likes of Autopsy being a main one yet with hints of Finnish death metal too. Overall this has a fairly mid range eq in the output of the recording which seems to work well giving it a forward-in your face style presentation. From alternating guitar riffs carrying out a very catchy buzz saw sound, to pummeling drums blasting full out or hanging steady with either the ride cymbal or high-hat hits guiding all using both slow or mid paced drum patterns at different points in the songs. Vocal wise, a deep growling tone projects out with a slight reverb coming across as a horror themed effect which relates to the band’s topic matter of horror and madness. “World Unraveled” definitely comes across in a very older influenced death metal style reflecting on the times of the later 80’s to early 90’s era. It will certainly be interesting to hear more from this band in the future and what they do next. 8/10 By Wolven Deadsoul