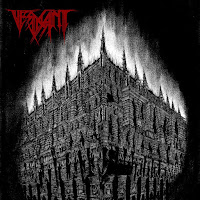 “Vesicant” is defined as a blistering agent, in this case referring to mustard gas used during the first World War, a war notorious for its technological advances on the battlefield. It was these advances that made for arguably the bloodiest and most viscous wars in the history of man, as battlefield tactics had not yet adapted to these new methods of destruction. Vesicant have chosen their name well, as their debut, The Shadows of Cleansing Iron, is a consistent barrage of battlefield chaos that just drops to a trudge blanketed in the fog of war. Their sonic assault feels like the hellish battlefields from which they draw inspiration: for example, the first track (“Blood Miller”) starts slow, as though the next wave of troops are advancing over the fallen before meeting the enemy before all out warfare ensues. The snare drum sounds like a Vickers Machine gun blasting through the haze of battle. The guitars, heavy and coated in fuzz and reverb blanket the sonic landscape with an air of fear. This maintains throughout the album, unexpected twists and turns before dropping back to the slow crawl as the next wave works its way towards an uncertain fate in the meat grinder of the front line. For a two-piece, I can’t get over how unbelievably FULL this record sounds. The cover art does the album justice: a massive, intimidating building looming out of the shadows pairs perfectly with the crushing, massive atmosphere Profanum and Mordance (Impetuous Ritual, Temple Nightside) present. In a genre that has a tendency to produce many clone bands, Vesicant feel fresh and inspired. To call The Shadows of Cleansing Iron a “breath of fresh air”, however, would do it a disservice; the air here feels full of carbon, diesel exhaust, and possibly mustard gas creeping in the trenches: exactly what I want in a war metal release. 9/10 By d00mfr00g

Skull Fist – Way of the Road