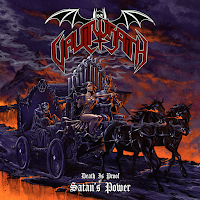 In 2006, when Dissection releases the much-anticipated Reinkaos, fans were a bit disappointed in the change in direction that the notorious Jon Nödtveidt had taken the band. To be completely fair, nothing could meet the fans expectations after a twelve year wait for a follow-up to Storm of the Lights Bane. In retrospect, Reinkaos is actually a solid record, relying more on the mid-tempo grooves of hard rock and traditional heavy metal than the blazing blast beats and shredding of The Somberlain or Storm of the Lights Bane. Eleven years later, enter Springfield, Missouri’s Vaultwraith. While still a black metal record, the album takes more of a Reinkaos approach, relying on a mid-tempo feel to espouse their devotion to Satan, black magic, and the occult. The band makes use of synths, but they never overpower the other instruments, content to stay in the background, adding a mysterious under layer of fog to the atmosphere of the record. Overall, the songs feel well written, highlights being the anthemic “Ravaged in the Crimson Mist”, the Mercyful Fate style riffing on “Night Ride Through the Black Wood”, the and, surprisingly, the slowest track on the album, “Manifest at Midnight”. The album is not without issues, however. The closing track, “Skeltonized Malediction” seems to meander aimlessly and really drags the record out instead of closing it on a memorable note. Production-wise, while not bad per se, feels overly digital and could benefit from less processing of the guitar sound and especially the drum tones. It’s a record I feel I’ll mostly be revisiting in the future in pieces, rather than a whole work. Nevertheless, Death is Proof of Satan’s Power is a solid debut from Vaultwraith and if they can overcome the production issues I will eagerly await their next material. 6.5/10 By d00mfr0gg