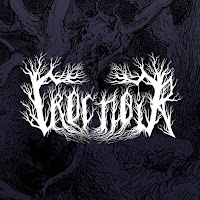 Croc Noir, which in English means “Black Fang” come from France and they make a very good Black Metal. This release, is the junction of the two demos “Froid” and “Nuit”. With an addition of a song entitled “Outro” that makes the transition from the first demo to the second demo, so I can say that it is a small bonus. eheh. I already knew the first demo “Froid” of 2016 and I liked it as soon as I heard it for the first time. At that time it reminded me of Black Metal made in the 90’s but without being so retro and with a personal touch, without being one of the immense copies that go around. So the first 6 songs were nothing new to me, but it was a good (again) listening and it helped to understand, in a manner of speaking, the transition to the following songs. The second demo, yes, was a novelty for me and I hoped it would continue the good Black Metal I knew and I was not sorry. Very good. In both the first part of this work and in the second part (for being two demos, here together in fomato compilation) there is a very well done Black Metal, with rhythms / riffs very well executed and quite pleasant listening, which by the way stayed inside of my head and that made my foot set the rhythm of the music. They can move from faster rhythms, to mid tempo rhythms and even slower rhythms in a very good way and without losing the atmosphere created from the beginning of the music. From the first demo to the second I thought the drums are more “real” (but they have a drummer) and the production, although raw is a little better. Another thing I liked a lot was the use of traditional instruments that can give more “soul” to the songs. They are not all over the album or in all songs, I’ll say, they appear in the exact places. Croc Noir is a band that I will follow and pay attention to. I hope they continue the excellent work, as they have been able to do till this day. I strongly advise this band to all Black Metal lovers. 9/10 The Key Keeper

Note: Many thanks to the band for their trust and for sending the CD so I can do the review. Thank you so much. Also thanks for the goodies.