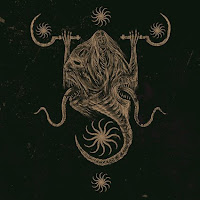 Serpentrance began in 2014 with their blend of a doomy, death and black metal combination of styles all together. With a limited release on cassette and now a CD release containing a bonus track, “The Besieged Sanctum” is their debut release upon this world.
Long sustaining chords with heavy dirty distortion ring out in relation to bands like Winter or Incantation, as slow beats from the drums with prominent snare hits containing a slight reverb effect create a sound atmosphere like a distant stage in a big hall. Raw but very brief guitar solos screech away sporadically and the use of whammy dives appear here and there, hitting the listener within this doomy black madness until all changes almost instantly, with everything breaking into a fast blast beat and all instruments going to full measure in speed and brutality. Then suddenly all begins again, going back into chords with a slow heavy catchy rhythm along with slowed down drum beats of the predominating doom nature of this EP. Adding to this, guttural vocals bellow out for the most part in a feeling of rage which echo and overlap at times like they are from the depths of some chaotic dimension of the Elder ones.
Overall this release has a very heavy and raw sense and with the combination of varying metal styles applied it seems to create its own place. However, there are times in this where the production almost seems to be pushed to far whether purposely for effect or not it is noticeable at times. 7.5/10 By Wolven Deadsoul

The Seal of R’Lyeh – Gateways to Yaddith