Interview: Come Back From The Dead (Spain)

Come Back From The Dead are a death metal band from Spain who play in the old school style and formed in 2008. Having a demo, a full length (The Coffin Earth’s Entrails) and of recent a new EP titled, “Caro Data Vermibus” which was released on vinyl on Mono Canibal and on CD on Transcending Obscurity Records, Come Back From The Dead are keeping the old school death metal spirit rotting in your face!

1/ Hi Guys and thank you for this interview! Since the release of “Caro Data Vermibus” how has the response been for this so far?
Curiously today, November 30th 2017, the date which I am responding to this interview, is the release date of “Caro Data Vermibus” on CD and Digital format from the left hand of Transcending Obscurity Records. Vinyl edition has been in charge of Mono Canibal Records and Abstract Emotions, two Spanish state labels that have joined efforts in the promotion and distribution more focused through the Spanish territory. Transcending Obscurity has internationalized more the promotion and distribution. The good thing is to be able to reach more and more people. Reviews do not influence us too much, is a dismembered part of this underworld. The best thing is that everyone can judge by themselves to listen to Come Back from the Dead fucking loud.

2/ Being a band in the old school death metal style, who would you say are your biggest influences?
The father Autopsy, the son Death Breath and the satanic hell spirit Murder Squad.

3/ What are the immediate future plans for Come Back From The Dead?
We are with enough desire and very motivated to play in more gigs more often, we also have the crypt open to play in festivals and if it´s possible, a tour beyond the graveyard. The reality at this moment… we only have three concerts booked, December 16th in Asturias, it´s a plan that we had prepared for a long time with Ovakner and we are going to execute it. Tottengot, a band from Oviedo will play too at “La Lata de Zinc”. We are going to play together again on January 27th, 2018 at “La Nave” and it will be as the murder act to dismember “Caro Data Vermibus” on live for first time in our city, A Coruña. On February 10th we will play again with Ovakner in the Basque Country at Orbeko Squad. Maybe some gig could come out of our lands and also some festival, we expect have more choice and we will try to have more live activity during 2018. 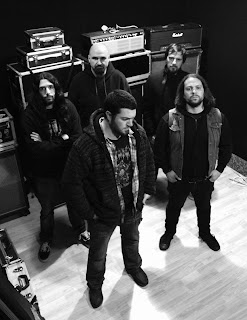 4/ Would you consider going to North America and possibly doing a tour there?
The idea of a tour, always within the possibilities of our fucking and disgusting jobs, is lobotomized in our brains, the time will come and we would be delighted to play in North America, everything could happen, why not? Would be fucking great be possessed to death during a North America tour!!!

5/ Generally, how is the death metal scene in Spain?
We think the Spanish scene is total underground. Some bands could have more notorious international representativeness but the scene… I think it must be sent to trial by someone outside from the Spanish State.

6/ Besides death metal, do you guys like or listen to other types of metal or other forms of music?
Mandatory! Listen to music is the main hobby for all of us. We are always looking for new and old sounds of Rock music in all its varieties, psychedelic, doom, punk, thrash, black, grind and more and more styles and bands. It is almost an obsession, at least for me, find really good records, with natural and organic sound regardless of the type of music, the ones that are masterpieces. Music is an addiction for us. Into the death metal scene, is important for us find new references and also new kinds of sounds but always into the OSDM.

7/ For listening to music, do you have a preferred medium or format like vinyl, CD, tape or digital?
Personally, I have this main occupation prepared to be played on vinyl. My CD player is not so good also the integrated tape player It has is a fucking shit. Digital music… I´m not on this wave but I sometimes play music on my computer to check some bands but the sound it´s not as good as the vinyl. I prefer vinyl because is the best equipment I have.

8/ How have things been with working with Transcending Obscurity Records?
We are totally to death with Transcending Obscurity, day by day, their work become more intense and important for us. Kunal has given us all his confidence and total dedication. He is a true soldier of the death metal legion. His work is going beyond our expectations. The truth is that we are totally grateful for all his dedication and effort. We think that the best is still to come.

9/ For the next future recording do you have an EP in mind or a full-length album?
The idea now is to decompose more songs for the second album, we already have 5 new songs and following this morbid rhythm, we will complete the full record in April. Next step, the release date will depend on the Label possibilities, maybe in last 2018 we could have the second coming. We have a lot of flesh to saw henceforth.

10/ In closing, is there a certain band you would either like to play a show with or even possibly tour with?
I have dreamed several times that I played death metal with Elvis Presley and I was who killed him on live. That’s enough.