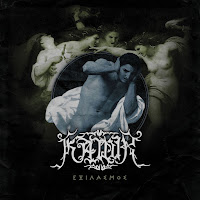 When considering black metal inspired by mythology, it is easy to conjure thoughts of Norse gods and Viking legends, yet Greece has a history of drawing such inspiration almost as frequently as their Scandinavian counterparts. Kawir is no exception, using their brand of  Hellenic black metal to tell tales, in the case of Exilasmos, of the houses of Lavdakides and Atreus. The music itself fits the epic scale of the legends, utilizing a grandiose scale that the Greek black metal scene has become known for. Despite being based around tragedies, the songs’ moods vary between ferocious and triumphant, the second track, “Oedipus”, being a stand out in regards to such features. The riffs are well-written, flowing from one to the next, showcasing the band’s experienced songwriting abilities. The choral samples sprinkled throughout add a nice touch, and while Kawir don’t rely on them for their grand sound, they do a good job of adding to the music. Overall, Exilasmos is a better-than-average Greek black metal release that warrants several listens to fully appreciate the storytelling as well as the songwriting, and for me one of heir best to date. 7/10 By d00mfr00g

Boethiah “Invocation of the Xenolith”