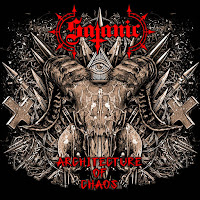 Satanic formed in 2016 and “Architecture of Chaos” is their debut release. This was first released independently and later by Brutal Records as a limited release on CD. Previously to the name “Satanic”, from 2010 to earlier 2016 they were known as the “Satanic Glue Sniffers” which have a demo and two independent releases. “Architecture of Chaos” comes across in a very classic manner like it was from some where in the prime 80’s era when thrash and earlier forms of death metal were getting more exposed to the world. Now almost thirty years later since those days, with a modern production this strong offering carries its share of influences of that time like in relation to bands like older Slayer, Razor and Death and many others for sure. Predominately, this recording is strongly led by the guitars with their crunchy aggressive tone while keeping things very full sounding. Melodic guitar leads can also be heard at different points through out the songs which compliment the rhythm parts well as a heavy clean sounding bass keeps a steady pace with its place in the mix while adding to the fullness of it all along with the guitars. Vocally, we have a growl-like voice and screams that have a bit of similarity to Max Cavalera in the older Sepultura albums. The drums here keep with tradition in older thrash and old school death metal styles while the timing ranges from slow, to mid pace to the faster hard-core beats at maximum speed as the kick drums vary while using single hits, to triplets and double bass hits depending on the timing or part within the songs. All in all, “Architecture of Chaos” is a very strong and full sounding presentation with thrash being the prime influence here but is not necessarily limited to either. I believe Satanic are heavily influenced by the older forms of metal from the 80’s era but are clearly doing what they like and want to do with it in their way. 8/10 By Wolven Deadsoul