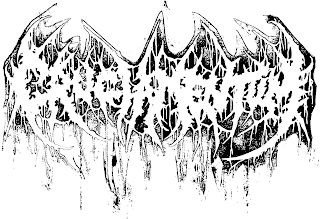 Cruciamentum is a death metal band from the U.K. who formed in 2007 and are on Profound Lore Records. Having seen them live recently on their Canadian tour they are by far not your regular death metal band by any means and tend to have a blackened nature within their sound and style. Their latest release is an EP titled, “Paradise Envenomed” which features an Absu cover as well.

1/ Hi Guys, thank you for the interview! It was great to see you live on your Canadian tour! Overall, how was the Canadian tour and your time spent here?
D.L.: On the whole it was a positive experience. The turn outs were good, the organisation from Metal Apocalypse was outstanding and most of the promoters were extremely well organised and gracious hosts. Thantifaxath were excellent every night and were also the best of company.

2/ Do you think you will do a USA tour or else where in the future as well?
D.L.: As long as conditions are met we will play wherever anyone asks us to.

3/ What are the immediate future plans for Cruciamentum now that you have finished the Canadian tour?
D.L.: We plan to lay low for a while now and finish writing our second album which we hope to start recording mid/late 2018.

4/ Since the release of the new EP (Paradise Envenomed), how has the response been for this?
D.L.: I don’t really bother to read many reviews of our own stuff, but what I’ve heard has been good. The 7” sold out less than two weeks after its release, so I think that speaks for itself.

5/ With that last two releases on Profound Lore Records (Charnel Passages/Paradise Envenomed), how has it been working with them so far as a label?
D.L.: We’ve nothing but good things to say about Profound Lore. Initially we were nervous, I had vowed to stay with Nuclear Winter Records as I felt that was a perfect home for us but when that label folded, Profound Lore seemed like the only other option as we had been friends with Chris for many years. It’s important to me to have a good relationship with a label, to correspond as friends rather than as a boss and employee, and in Profound Lore I feel we found the best possible home for the band. 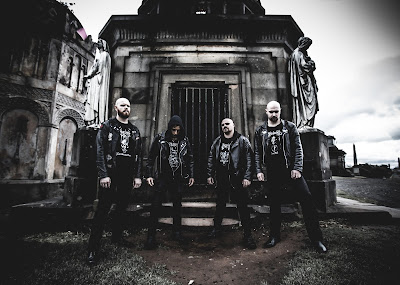 6/ How would you describe the metal scene presently in the U.K. for the most part?
D.L.: I would recommend that people check out Vacivus and Necromaniac. Indesinence (RIP) was also to me one of the most under-rated bands ever, extremely innovative and great composers. For the most part though – we couldn’t care less about “the scene”. There’s nothing here for us.

7/ What would you say are your biggest influences both musically and topic matter wise?
D.L.: Musically our influences are wide – in terms of metal it would be bands such as Immolation, Morbid Angel, Incantation, Shub Niggurath, Disembowelment, Demigod, Absu, Slayer etc. But equally we are influenced by the music outside of metal that we listen to – dark ambient, 70s progressive rock, goth, hardcore etc. We’re inspired in some way by everything we listen to. We approach song writing with the idea that if something fits the atmosphere we’re trying to convey then by all means use it. That said, it’s still important however to keep our experimentation within the boundaries of death metal, it needs to be heavy and dark above all else!
Lyrically and conceptually influences are harder to explain. Death and existentialism are the loose core concepts around which Cruciamentum’s lyrics are centred. They’re explored in relatively abstract ways, often influenced by different states of consciousness. I don’t want to explain the lyrics too much though; I prefer to keep some of the mystery and let the listener draw their own conclusions.

8/ For your song writing process, do you all contribute to the music or otherwise have a certain method you use?
D.L.: With each release the writing has been more collaborative. Paradise Envenomed and the upcoming album are by far the most balanced band effort yet. There’s no particular method though, if something works, we use it.

9/ After seeing you live for the first time, I felt things were presented very well and together on stage. With the new line up change and new member Jordi on the drums, how has this been as a change for Cruciamentum?
D.L.: Actually, we also have a new bassist. R.B. – our former bassist now plays lead guitar and shares vocal duties with me. I personally think with the new line-up we’re the strongest and most confident we’ve ever been. We’ve made massive improvement in our live performance and writing has become easier and less restricted.

10/ In closing, do you all have a preferred medium for your music or music in general for listening as in vinyl, CD, Cassette or digital format?
D.L.:  Vinyl and CD for me. Cassettes have always been “the demo format” for me.

Heads for the Dead Interview