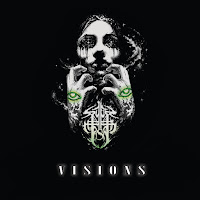 Merciless Savage … Come from Wales (I am sincere, I know very little coming from this country) and have been in this world as a band since 2007?!?!?!? Unfortunately only in 2017 was I aware of this band (One man band) and because they contacted me because otherwise I would still be and here I admit, in pure ignorance of the quality that the band has. And what does this gentleman or this band present us here in this EP of his name “Visions”? Well, the sound coming out of the speakers of my stereo is a Death Metal with some Black Metal mix. Although some songs have more Black Metal riffs than Death Metal, but the style that is most present in my opinion is Death Metal, be it in riffs, the way the drums sound (although sometimes it sounds like the programmed drums ), voice and even the equalization / mixing / final mastering of the EP. Unfortunately (in my opinion) this work only exists in digital format, but this is another talk and we will return to the band itself. I can say that they are +/- 27 minutes of very good hearing. It does not become “sickening” to your hearing, it is not saturating, it is not boring, on the contrary it is very good. The change of speed in the songs is not predictable as in most bands within this musical style, the voice fits in the right places and your tone is good. Being five songs present I thought it would be easy to raise one or two songs and spread the word and say “listen to this song that is very good” but nahhhhh, I could not. Every time I listened to this EP I discovered details and more highlights in all the songs. I listened many, many times, believe me I heard, I even hummed the songs many times because the riffs did not leave my head. But I had to choose one song, or rather I chose two, however I am not denigrating the other songs, on the contrary. Listen to the songs “Visions” and “Poison Legacy” (excellent riff at minute 1). But … I also advise the song “Flight of Thought and Memory” especially for having a different way of singing that along with the riffs of the music make a mixture very well achieved. The remaining songs? I also advise you, that’s it. I advise the EP in its entirety and final point, because in reality it is very well achieved. This is a band that I will try hard to follow because it deserves. Excellent job. Many congratulations on the final result. 9/10 The Key Keeper