Prayer of the Dying “Banished from Death” 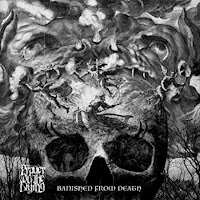 Well …
The end of the year 2017 is coming to an end and I receive a promo directly from the band. Prayer of the Dying are from the small country, Republic of Malta. As far as I’m aware there are some Metal bands but there are few and one of them is Prayer of the Dying. Band that I know since the second album that was released in 2008 but I do not know all its releases (some of the splits that were going out between the albums). But let’s talk about this album, self edited and simply limited to 150 copies. Divided into 13 songs could be a dull and / or monotonous album due to its length of time, but no. There were high moments in my audition? Yes. There were less good times in my audition? Yes. It is an album that in my opinion has much influence that goes from Viking Metal, melodic Black Metal and a Gothic style. It is well produced, I can hear all the instruments perfectly (I like the most elaborate bass guitar lines), there is a good musical structure in many songs, unfortunately not all, I have to admit. I could not appreciate the clean voice that appears a few times and I sincerely think that the band, or rather the one man band, sins to put it this way and it is here along with the riffs used in these parts that for me are with a strand and/or Gothic influence, Reminds me the albums from Paradise Lost or Sentenced when they were lost in their own musical style. And yes this is the only negative point in my opinion on this album. Taking this negative point in my opinion, this release can be an album that listens very well and can be interesting and I liked the parts where I listen the traditional instruments. Take your doubts and listen to the songs on the links right below. 7/10 By Me, Myself & I


Note: Many thanks to the band for their trust and for sending the CD so I can do the review. Thank you so much.