Humanity’s End are death metal band from the USA that formed in 2017. With catchy heavy riffing of the old school nature fueled by HM-2 buzz saw guitars on full, accompanied by deep growly vocals and traditional drumming for this 90’s influenced genre, these guys have recently released their debut and independent EP titled, “Between Life and Death.”

1/ Hi Guys and thank you for the interview! Congrats on the new release by the way! Having recently discovered your band through a link online, the new EP got my attention right away and being a big fan of the OSDM already, I really liked what I heard! How has the feedback and response been since the release of “Between Life and Death?”
Hello, Thank you. It has been great given the fact that we did not release any demos or have an online presence until just a few weeks before the CD was released (this was done intentionally) so given that fact the response has been great, people have been liking it and more people are checking it out each week.

2/ What inspired choosing the band name, “Humanity’s End?”
There is a famous quote from Chief Seattle “Once the last river has been poisoned, the last tree cut down and the last fish caught will man realize money can not be eaten”. We are rapidly approaching this point in time and it’s not looking good for humanity’s future. Also, go to http://www.worldometers.info/ and look at the live tracking, it predicts that there are 16,582 days until the end of oil is reached. That is only 45 years away. If that number is true it will be the end of life as we know it and there will be no place to hide. Between those things and the current political climate of the world with endless wars, nuclear threats, rapid extinction of animals, the death of coral reef, chemtrails, Fukushima Daiichi still leaking, earthquakes, flooding, wildfires, and Hurricanes it seems like it will soon be Humanity’s End. Anyone wishing to learn what is really happening needs to check out the book “Forsaken Earth: The ongoing Mass Extinction” by Paul Sequoia Rauch”. His book was an inspiration to the band name.

3/ What would you say are your biggest music influences overall?
80’s Thrash and Death, bands like Slayer, Possessed, Kreator, Sodom, Celtic Frost, Bathory and the whole HM-2 movement with Entombed, Carnage, Dismember, and Grave.

4/ Being a two-piece band, how does the writing process usually work for you guys?
I (Jay) do all the writing so the process is very simple. It’s just me in my underwear in my home studio writing and arranging things late at night. 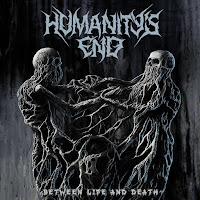 5/ I noticed that not only did Jay (Vocals & HM-2 Pedals) record, mix and master this EP for Humanity’s End but he also has an on-going band called Effigy that began in 1992 which has a few releases out. From recording and your work in Effigy (Jay), what got yourself and Jessie together to form and start working on Humanity’s End as a band?
Jesse and I have known each other for 20+ years going back to our days of playing in Hardcore bands in Detroit so it was just a matter of a phone call to get a project going and the songs were already written and neither of us were busy so it was an easy deal.

6/ What are the future plans for Humanity’s End?
We will be working on a full length. We do have a rehearsal space in Livonia where we have jammed but we are a long-distance project band so we are not planning on doing shows at this time but who knows what the future holds.

7/ Do you have a favorite or preferred format for music such as cassette, vinyl, CD or digital?
I’m big on CD and Jesse is all about vinyl and buys it regularly. I think vinyl is a timeless format that will always be desired and collected and I love that fact that it’s bigger and the cover art can be appreciated in its full-size glory with more photos and easier to see/read compared to other formats. Digital download is great too because you don’t have any pressing or shipping costs to make up so you can sell the product cheaper and more people have access to it via the net. Because of these things our digital album is a whopping $2 on Bandcamp!

8/ Besides death metal or metal, in general, are there other types of music you like, listen to or even consider to be another type of influence?
I wouldn’t say these things are an influence to what Humanity’s End is doing but Oh yes, Jesse loves Grim Reaper, Bobby Rock, Mastodon, Sleep, Pentagram, The Mentors, The Sword, Elvis and Terry Bozzio and I have another project with 4 releases called Tribe 3. It’s all meditative type stuff with tribal drums, Didgeridoo, and African percussion, it’s more for the Burningman type of crowd or someone who wants to meditate or trance out https://tribe3.bandcamp.com/album/giants-of-another-world 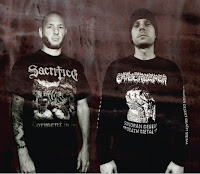 9/ What is your opinion on revivalism of old school death metal that originally began in the later 80’s to early 90’s era that was almost or around 30 years ago now, yet there are many new or younger people in bands today that are doing this?
They said metal was dead back when grunge was gaining popularity, well look at it now! I think it’s amazing that younger generations are into the older death and thrash that we came up with and that it has influenced them like it did to us old timers when we were teens. You have amazing bands like Gatecreeper, Power Trip Warbringer and Nails out there carrying the torch and killing it along with more obscure bands like Boethiah, and Gravestone. It’s great to see. I can spend hours online finding new bands, it’s insane.

10/ If you had the power to change anything in this world for whatever the reason, choice, cause or belief, what would that one main thing be and why?
Oh Boy, this is a tough one. I know you said only one thing but short from just wiping out the entire planet for a do-over I would change so many things, first off, I would de-invent smart phones. These matrix leashes would all vanish and instantly people would be able to live fuller lives and be in the moment again instead of constantly being jacked in looking at unimportant mindless things while life passes by, these devices have created such a disconnect that the American Medical Association has named a new disorder called cell phone separation anxiety disorder. And for the record I do not own one. How about we look at what other countries have done and adopt the good. Here are some examples:

• No electricity bills; electricity is free … for all citizens.
• No interest on loans, banks are state-owned and loans given to all its citizens at 0% interest by law.
• If you are employed after graduation, the state would pay the average salary of the profession as if he or she is employed until employment is found.
• If you want to take up a farming career, you receive farmland, a house, equipment, seed and livestock to kick start your farm –
• A home considered a human right.
• All newlyweds receive US$ 50,000 to buy their first apartment so to help start a family.
• A portion of oil sales is credited directly to the bank accounts of all citizens.
• A mother who gives birth to a child would receive US $5,000.
• When you buy a car, the government would subsidize 50% of the price.
• Education and medical treatments are free. All people have access to doctors, hospitals, clinics and medicines, completely free of charge.

All politics aside that is a list of things that were done in Libya of all places so I have to ask, if these things have been done why aren’t we all doing them globally? Things could be much better for all of humanity.