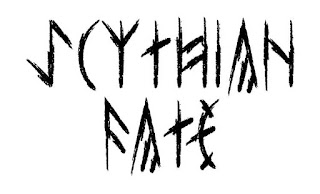 Scythian Fate is an Aussie metal band offering a fair combination of dark progressive technical thrash, mythological and historical lyrical themes and hopeless fatality in their music. Their obscure debut EP “Darkaena Scythia” was out in 2016, and now I’m chatting with Tom Kotsonis and Nino Morano about the band, the recording of their new album and future plans.
Hello, guys! Thank you for taking time for this interview! Could you please tell us in brief about Scythian Fate. Since when the band has been around and how would you describe your music?
Tom – Hey, thanks Vladi. It’s an honour to be interviewed by you and horns up to the Blessed Altar Zine  for supporting new bands m/. You guys do a great job! The concept of Scythian Fate was hatched over five or six years ago,  although Nino and I have been jamming and writing shit together for over three decades. We describe our music as  dark progressive/ technical thrash. Over the years, we developed and matured our writing styles which compliment each other well. Our friendship and musical partnership was forged in the school playground. We shared the passion for metal, in an environment where we were greatly outnumbered. Our classmates referred to us as “those two devil worshippers” but we couldn’t give a toss. It inspired us to continue to be non conformists and believed in the power of metal. We toyed around with many band names over the years; “Acolyte”, “Lost Messiah”, “Azazel”, “Lord of Thorns” amongst others. I have always been fascinated by the history of the Near East and Anatolia. The “Scythian Gate/s” was an important geographical feature which saw many armies marching through over the centuries. I thought it would be a really cool name. One day, A typo on a text message to Nino accidentally led to Scythian Fate rather than Scythian Gate Lol. We both agreed this was perfect. 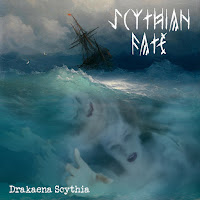 You are a studio band duo. Who’s playing what, and how do you manage it with the other guest-musicians and instruments
Tom – I play rhythm guitar and Nino plays rhythm and lead guitar; he is also playing bass on the new album. We have played with a number of cool session musicians over the years who have contributed their time to our music. However we decided in more recent years, that it was important to keep a unique signature sound and Nino and myself form the core of our music. After recording our EP, we decided it was more productive for us to be more of a studio band and see “Scythian Fate” as more of a metal project, for the time being.
What are your main musical influences – personally and those which could be found in the band’s music?
Tom- I grew up in a Greek household where I was surrounded by Balkan and middle eastern folk music. I developed an ear for offbeat exotic melodies and the melodic minor scale. Nino was classically trained and has a very extensive classical guitar playing repertoire.
Ultimately we were both influenced by heavy metal from a very early age. Our influences stem from Black Sabbath, Iron Maiden, King Diamond, Kreator, Exodus, Slayer to Dream Theatre and Symphony X. We are disciples of the  early thrash scene and have been heavily inspired by Teutonic and Bay Area thrash bands
Your dark debut EP Darkaena Scythia was out in 2016. It lays conceptually on the mythlogy and offers dark progressive thrash elements. What’s the inspiration behind?
Tom – Drakaena Scythia was the mythological mother of the ancient Scythian race. She was half serpent and half woman who seduced the hero Herakles in her cave to give birth to the Scythians. It made sense to use this old folk tale to name our EP. The music has a unique signature sound and as you say, it has elements of dark prog thrash. We also included an instrumental which features an operatic singer signifying the wailing of the Drakaena. The songs on the EP dwell into historic and sociopolitical themes.
So besides music, you are very much interested into history, myths, and of course the world’s situation as it is now?
Tom- Yes we both have a fascination with world history and ancient lost civilizations. We are freedom fighters and critical of Hypocrisy and injustice. We also have an inherent interest in the paranormal and share the same passion for world football.
Now you are working on a new album. It will interesting to understand more about in terms of music and lyrics. What is the direction?
Tom- The new album is called “Matrimony in Madness!“. It is a much heavier darker album. Although it is a more mature album,  it still maintains our signature sound. The themes are  essentially based on the lunacy of our society and the undercurrent that binds it all together. We feature a tribute tune to Chuck Shuldiner which is a crushing thrashy/ death metal tune. Our songs cover everything from shock jocks, Shakespeare, false preachers, philosophy and history. Overall we are very happy with this album. The skeletons of the songs have been recorded and Nino is now tracking the solos. Once that is done we will lay down the vocal tracks. 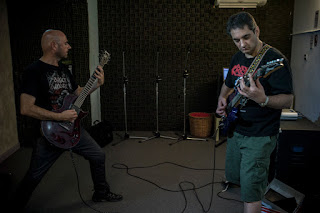 When can we expect this album to be released and which is the team working behind it?
Nino – We have set a rough deadline to have this album ready by mid year. So if all goes well it should hopefully be released sometime in the 2nd half of 2018. Tom and myself are the main team behind this project. We also have assistance and help from friends and aqaintances who contribute their expertise where it’s required. Our long time mate Ed Sleiman is our resident artist and is currently working on an epic canvass for “Matrmony in Madness”. It’s excellent artwork and look forward to unveiling it when we release the new album
Do you plan to release the new album in various formats? Vinyl and CD?
Nino – That’s something we have not fully discussed as yet, but off-course we would like to give our fans more options other than just a digital release. Hopefully, we will be able to sort something out for when Matrimony In Madness is ready to go.
What about live shows after the release? A tour maybe?
Nino- We would love to play live shows and tour. Being from Australia though has its logistical challengers. This is due to distances needed to travel and the economics involved. For example, touring costs etc.. In saying all that, it’s something that we have not closed the door on, especially as the band grows. Anything is a possibility in future, so never say never.
How is the metal scene in Australia as you see it now, especially the underground one?
Nino- The underground metal scene in Australia is reasonably healthy but at times has a tendency to be fractured. There are quite a few excellent bands in the various metal sub genres. The problem for Australian Metal is our isolation due to geography. This makes it’s difficult to tour outside the country and also within. Cities and towns on this continent are very widespread and sparse.
We’ll be looking forward to the new record and news around the band. I was a pleasure having this interview with you, guys. Is there anything else you would like to tell to the lunatic underground metal community?
Nino – Thank you, and the Blessed Altar Zine for your support. And thank you to our fans, friends and loyal supporters out there. We greatly appreciate it.
Band
Site
Bandcamp
Facebook