Daemonokratis brutal death metal band coming from the depths of Agrigento, Sicily. Their first full-length debut album The Scourge of Chaos was released in the summer of 2017 and brought to the world mind-blowing blasting butchery from the South of Italy. On top, there are plenty of interesting bits that we can talk about with Alessandro Wehrmacht, vocals and rhythm guitars in Daemonokrat, and one of the founding members of the band.
Hello, Alex! Thank you for taking time for this interview. Tell us briefly about the band – how it was born and who are the other band members now?
Hello Vlad, pleased to talk with you. Daemonokrat was born in 2013 from the spores of  the Black/Thrash band Religio Mortis. We felt the need to experiencing a more Death Metal sounding territory. Religio Mortis were basically a studio project that lacked a real drummer, so with Daemonokrat we started our live activity as well. The new current line-up changed since the release of The Scourge of Chaos, and it is now as follows: A. Wehrmacht (Vocals/Bass), Necrosplatter (Guitar), D.Doom (Guitar) and ‘El (Drums).
You and the rest of the guys have been part of other bands prior to Daemonokrat, right?
Yes, Religio Mortis apart I also played with The Krushers (Grindcore from Agrigento). 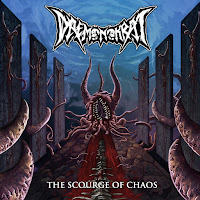 What does the band’s name stand for and who is the holiest servants of doom?
The name Daemonokrat comes out from the combination of the two Greek words Daimon (δαίμων, divine being) and Kratos (Κρατος, power). Combined together they have a double meaning: The first is directly bound to the tradition and the mythology of our homeland Sicily, enriched by traditional figures that recall: satyrs, chthonian forces, primordial titans etc. Besides, Daimon represents for Greeks the quintessence of knowledge, of being, of the arts as a divine emanation. And Kratos is the power, or the forces that used to govern, throughout these figures, the timing of life and of the symbolic and ritualistic religiosity of men. The second meaning is bound to a mere play of words where the word Democracy is connoted negatively in reference to post modernity in which we are all bound to live in and in which who detains power are the masonic lodges and lobbies that ”vampirize” and enslave every form of liberty. (FROM ENSLAVEMENT TO OBLITERATION!!!)
…We are The Holiest Servants of Doom!
I suppose you personally have plenty of death metal influences, but can you narrow down the most important death metal bands for you? The ones which made you play this brutal music?
Basically Slayer, Carnivore, Celtic Frost, Morbid Angel, Terrorizer, Nocturnus, Revenant, Napalm Death….and the list might be too long.
Are there any other influences, genres or bands you listen to?
I personally enjoy music 100%!!! My tastes range from 70’s up to 90’s, no matter what genres. I love quality and I don’t reduce myself to just one genre or style. To make an example: Kraftwerk, Laibach, Killing Joke or Dead can Dance and all the 80’s New Wave.
How do you split the responsibilities about music and lyrics among the band members? Are there any specific themes from real life which inspire you about your lyrics and music.
Both me and Necrosplatter take care of all the compositions, but the lyrics are all mine. There are no real life references in what I write. Daemonokrat is an escape from reality and most of the inspiration comes from Lovecraft, Blake, Poe and apocalyptic themes and visions. Perhaps only folly might be the real link to reality. 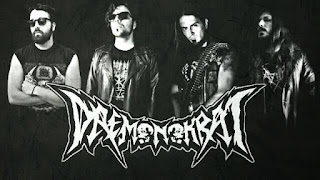 Please tell us some details about The Scourge album. How long did it take to record it and how would you describe it for our readers?
“The Scourge of Chaos” was entirely recorded, mixed and produced in my studio in a couple of months (February-March 2017). After a two-year pause in the activity of Daemonokrat, we realized we had quite enough material to fit into the first full length. More aggressive, fast and technical stuff if compared to our debut EP “Predators”. Our main intention regarding “The Scourge of Chaos” wasn’t really that of inventing anything new and most of all of not homologate into the modern days’ death metal panorama, but rather that of going back to re-interpreting the old themes (still actual today) of the golden age of old school death metal. Both lyrically and musically.
You had the pleasure to work with a couple of interesting names while recording this album – the mighty Kam Lee and Georgio Trombino. Let us know more about their participation on the album.
Kam Lee has always been a huge influence for me. Long before hearing the roar of Kam Lee I totally had a crush on the voice of Barney Greenway in “Harmony Corruption”, and once having that LP in my hands I found out  in the thanks list  that Barney  got inspired by the voice of  Kam Lee. As soon as we got finished with the recordings of “The Scourge of Chaos” I literally contacted Kam Lee right away and sent to him a copy of the album. After a few days he replied to me enthusiastically about the album and he proposed himself for a collaboration and so here we go man!!!Still today there are personalities that really love and believe in the underground scene without being precious even after more than 30 years of honourable career!!! Giorgio is a good old time friend of ours, he also took part in “Predators” during the recording sessions with backing vocals and mixing.
What are your plans for 2018? Shall we expect a new album soon?
We are already working to new material for a following album, writing the new songs is taking much part of my time this lately. Is also, I’m also working hard to a new Religio Mortis release quite soon.
You are in the dawn of the war, so what are your touring plans?
We do plan to make some gigs next summer. Any chance to play in your area? Let us know!
If you are a headliner on a fest or tour, which bands would you pick as your support? Could be any band…
Yes, Madonna or Spice Girls would be perfect!!! Hahahaha!!!! Now seriously, of course any band would fit in.
How do you see the death metal scene currently – in Italy and worldwide?
Honestly? Too many bands around! Hard to say or describe. In Italy there’s a very vibrant scene today. I hope to share the stage with many of them.
Once again thank you for this interview and we’ll be looking forward for news and details from you and the band in the future!
Thank you Vlad for the space given and we wish you all a great time and listen to Daemonokrat three times a day at least. Hahahaha!!!
See you round!!!
Band:
Facebook

An Interview with Brett Walker of Kaupe