Portuguese blackened thrash whirlwind Alastor has a couple of important occasions in 2018. The band turns 30 years on the stage, and to celebrate this, a new album “…The Dark Tower…” has just been released via War Productions. We have reviewed it for the Zine earlier, but it is a fantastic moment to talk with J.A., the main man behind Alastor, about the long journey and the upcoming plans.

Hello, J.A!Thank you for taking time for this interview for Blessed Alatar ZIne. Fist of all happy Anniversary! To many more to come! How are you feeling after 30 years of reaping and tearing?
JA – Greetings to everyone reading this. Thank you for the support towards ALASTOR. Well, these 30 years sure did past by very quickly. I still remember, back in 1988, me and Jorge trying to write some songs and I’m still doing that. The ideas still come up so I’m still very excited about this project.

Tell us more in brief about the Alastor’s history, the overall journey and those six full-lenght albums you left as legacy so far? 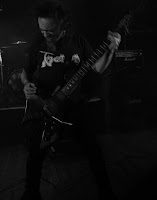 JA – Like I said, back in 1988, me on guitar and vocals with Jorge on drums, we started working in some songs. We managed to write 3 songs but never found more people interested in playing with us. In 1990, Decayed come to be and Alastor went to rest, until 1995, when I decided to record the 3 songs we did back in 1988. After that, I asked JM of Decayed to join me on bringing back to life Alastor. That line up lasted until 2002. After that, I asked 3 other friends to join me. With that line up, we did 2 shows.

What is the actual line up of the band?
JA – Me on rhythm guitar, Gualter on vox and bass, Nuno on lead guitar and Filipe on drums. 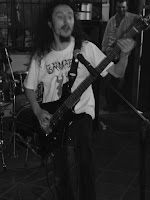 Five years since your last album “From the Hellish Abyss” now comes the fantastic “…The Dark Tower…”. What did take you so long?
JA – I have a few side projects, so, sometimes it’s not that easy to find time to create a full album. Besides, when I do record the songs, the other members have to find time to do their work. However, the next album will come out in January 2019 if everything goes well.

Tell us a bit more about the album, the recording process etc. How would you present the record to our readers?
JA – I write all the songs, record the rhythm guitars. After I send that to the rest of the band and they start working on their parts. Gualter, also writes all the lyrics. We try to record as if the album was made in the 80’s, that’s our aim, to recreate what was being done in the glorious 80’s. 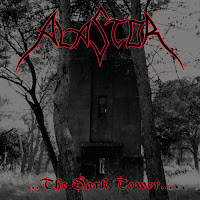 Where is actually the dark tower?
JA – The dark tower on the cover is located in a wood next to the beach of Carcavelos. A very nice place to have some beers and listen to some Metal.

You are playing blackened thrash metal exactly how it was done 30 years ago – merciless, with real passion and fury. What does inspire you – any specific topics in life, the Dark one or anything else?
JA – I’ve always been a very big fan of 80’s Thrash Metal and that inspires me to create the songs you hear on the CDs. All my inspirations comes from my collection of vinyl and Cds. I still listen to all my stuff so I’m always being inspired to create something. As for the lyrics, since Gualter joined in, he’s the man responsible for that departement. 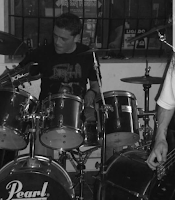 Blackened thrash got very popular over the last years. What do you think was the main reason? Which are the bands worth checking from this new wave?
JA – I have no idea of whats going on in the scene. I left it many years ago. I got sick of all the bulshit around and I doubt that it has gotten any better by some of the bands we meet on the road. There are always bands worth checking out and for that I sugest: You Tube, what I call: “the tape trading of the new millenium”.

And naturally comes my next question – which are the bands infuencing you the most all these years?
JA – Like I said earlyer: all the bands from the glorious 80’s: Venom, Kreator, Carnivore, Sodom, Hobbs, Taurus, Merciless, Angel Dust and many, many more.

Why did you choose Portuguese for your lyrics?
JA – I can’t remember why that came to be, but I know that I sugested that on our second album and JM thought that it was a good idea, so I wrote all the lyrics in Portuguese. It just sounds different.

What are your plans for 2018? When do you see next record coming?
JA – I already wrote some riffs for the next album. I had some ideas so I decided to write them down for the next album. I expect to record the new album in the Fall for an early 2019 release. For the time being, the title will be “The Unholy Hordes”.

How would you like Alastor to be recognized and remembered? What does Alastor stand for?
JA – I would like what it is: Alastor are a Blackened Thrash Metal act from Portugal. The critics towards this new album “The Dark Tower” have been excelent, so I think that we are going on the right track. We try to perpetuate the feeling from the 80’s, that is what we stabd for.

Thank you very much once again! Great to having you with us on the Zine! Looking forward to more news around the band! Is there anything else you would like to tell to our readers?
JA – Thank you for this nice interview and for the support towards Alastor. If people reading this are interested in old school Thrash Metal, contact me for merchandise available: chroan#sapo.pt
Keep Metal alive m/

A Hit From The Tar Pit: An Interview with Joshua Murphy of Blessed Black