Hailing from Canberra, of the Australia Capital Territory, Claret Ash have returned with their 3rd full length ‘The Great Adjudication’. However, if you were thinking that you might have seen this before, you would be half-right! You see, this 75 minute album is a combination of the bands last two releases that had the same title (The Great Adjudication: Fragment I and II) – released independently in November 2017 and April 2018 respectively. With their signing to Casus Belli Musica, we are now presented with both, laid out on one full album!

Featuring stunning cover art from Samuel Nelson (Stigma Art), the look and feel of this album just screams Darkness. Slated as a Progressive Black Metal band, Claret Ash are just that and a tad more. There is far more going on here than you might think. There is a certain ‘epic’ quality about Claret Ash’s writing. Essentially, the first five tracks is the aforementioned Fragment Part I, which conveys Claret Ash’s blindingly vicious tremolo picking style wrapped up in a thick, dark, yet highly atmospheric production. The opening track ‘Essence of Fire’ smacks in with one drop on the snare and then a blast-beat full throttle affair rips through with cascading riffs and leads. The following four tracks are of similar ilk. Totally menacing. 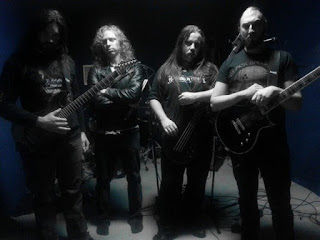 Throughout The Great Adjudication, the influences are laid out for all to hear – for me, second and third wave Black Metal proponents in Borknagar, Gorgoroth, Wolves in the Throne Room and even proggy Arcturus moments rear their heads on multiple occasions – and this is where the second half of this album becomes an even more interesting beast. While the album does play out as one complete entity, it is clear that the seven tracks from Fragment II show off Claret Ash’s penchant for a more riff oriented and progressive side to their music. From the multi-faceted vokills (dual lead/backing vocals provided by guitarists James Edmeades and Josh Pearse) – harsh, black screaming and guttural to clean, almost spoken word approaches. From the use of dreamy acoustic work on several introductions to slower, more epic melodic phrasing in the leads, there is a great sense of experimentation in the band’s song and as such gives them a particular identity among their peers. If pushed for examples – tracks such as the fantastic ‘Like Tears in the Rain’ and the epic 7+ minute epic of ‘Vicissitude’ are ample proof of this band’s talent.

The Great Adjudication sounds great – a dark, brooding feel has been captured in the production with Tracks 1-5 mixed and mastered by Ryan Huthnance; Tracks 6-12 by Mike Trubetskov at AOL studios; The mastering by Maynard Gold at Hilltop Recording Studios. Add this to some top-notch quality songwriting and a visually striking presentation, Claret Ash possess all the characteristics of a seriously professional act! Hopefully with the backing of the Casus Belli Musica label, their work can be fully realized and their following outside Australian shores increases! High recommended for fans of dark, atmospheric Progressive Black Metal! 8.5/10 KMaN 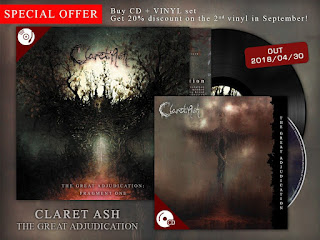 8/10 To Greatness and Glory
**Please support the underground! It’s vital to the future of our genre.
#supporttheunderground