“Husk” is the third full length of the veterans of the Australian underground extreme scene: Vahrzaw. A trio of musicians dedicated to the sonic invocation of blasphemous storms of Blackened Death. A band that began in the mid-90&#39;s, but could only release its first album in 2009: the highly recommended “Defiant”. Five years later they launch the successor, “Twin Suns & Wolves’ Tongues”, and now, four years later, the album that we have in hand and that, unfortunately, represents the swan song of the trio. As I could read recently on the Bandcamp page of his label, Blood Harvest: “After 25 years of playing punishing black/death metal, VAHRZAW have really had enough of the bullshit associated with producing albums, and even EPs”, I assume they got tired of writing music. Which is a pity, since they have always had great potential. 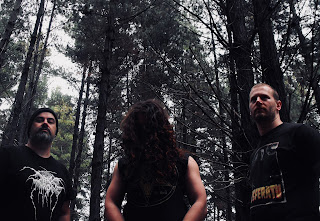 “Husk”, musically, constitutes a great monolith of fury that starts without concessions and, in rare occasions, stops to catch its breath. The first thing that stands out is the drumming of Brandon Gawith, which is quite high in the mix, and is a good thing in this case. I mean, the guy sounds like a bulldozer crushing skulls in his path. A feature that is always welcome in a Blackened Death album. The allusions to God Dethroned are obvious, though removing all the more melodic aspect of that band. I think that Vahrzaw exploits very well the trio format to achieve an assault more linked to the most brutal specter of the genre, concatenated a chain of riffs that, without being highly original, lean very well on the implacable machine behind the kit. The bass is correct and simply follows the guitars, although helping to achieve a very well obtained meaty tone. Vocals vary between raspy rashes and some growls, also very effective. The album develops with demolishing force in its first half, fading a little in the last tracks, where some ideas begin to repeat and move away from Black/Death territory, to venture slightly into more Thrash structures.

We must not forget to mention the excellent cover art, with a hand-painted drawing, totally monochromatic, with an eerie scene of skeletons in a misty forest. It really gives the work a very specific and solid visual concept. One of the best aspects of “Husk”. An album that fulfills its purpose and a band that exceeds in the technical aspect, completing a very solid last album, although sounding a bit forced in its last section. Recommended for any Blackened Death fan. 7.5/10 Sergio


7/10 – Victory is possible
**Please support the underground! It’s vital to the future of our genre#supporttheunderground