Anguish – Under The Influence

Grab a beer. Dim the lights. Dial the volume to “eleven”. Lower the stylus into that shinny black wax. Sit back and close your eyes … sounds of clinking bottles, musty smells, a dark stage … a quick flash from the sparse, rusty flood stage lights … without further ado … Drums. Guitar. Bass. In your face – blasting from the smoky club’s PA system … Stage monitors at arm length … surrounded by sweaty leather and denim. Center stage: the band, a trio, explosively launched into their set! The stale air vibrates, filled with sheer electricity, leaving no void. The packed club erupts! … “Hello, Detroit!!!” – the front-man greets the crowd. Crowd goes ballistic! 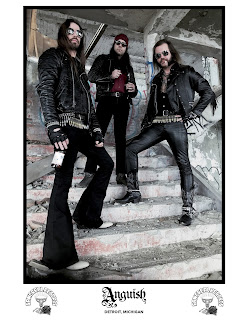 This is Detroit Rock City, home to some of the best and unique, worldwide recognized rock and punk acts in the history of contemporary music: MC5, The Stooges, Alice Cooper, Cactus, Seduce, to name just a few. This is where the local, print music magazine, CREEM (1969-1989), is known to be the first publication to coin the words “punk rock” and “heavy metal”! Not coincidently the magazine was also among the first to sing the praises of metal acts like Motörhead, Kiss, Judas Priest, and Van Halen.

The year is 2018. Center stage is the Detroit native power trio ANGUISH. The music: some of the best punk influenced (NWOBHM) heavy metal in the last 30 years! The band, formed back in 2007, after an array of demos and split releases, a couple of lineup changes, and a varied musical past, released their full-length debut album “Under The Influence”, on March 24th, with the help of the underground, local, Detroit’s obscure label Sangreal Records. The sound: an immense late 70’s vibe, a delightful combination of punk attitude with masterful, early heavy metal complexity, yet loose and vibrant, where all band members are distinctly present! The front-man/founder, Mark Kiseliovas, forcefully delivers monumental bass lines and assertive vocals, in a sea of guitar riffs (including a plethora of galloping riffage), hooks and solos, courtesy of longstanding guitarist Guy Lamb III, all firmly driven with utter flamboyance by the newest (since 2015) member of the trio, drummer, Dennis Nevelle. The influences from earlier acts such as Iron Maiden, Thin Lizzy, Motörhead and the New Wave Of British Heavy Metal (as a whole), are undeniably there, all transposed into a unique 2018 musical experience. An equal variety is to be found lyrically, with subjects reflective of humanity, horror, fiction, occult and misanthropy, completed with the (late 70’s) era correct – analogue sound production! All of it sums up to, and as very aptly inscribed into the LP’s dead wax: NEW WAVE OF DETROIT HEAVY METAL! 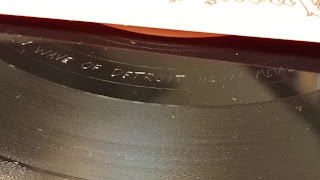 With the initial vinyl run of “Under The Influence” already sold out in Japan, Detroit’s ANGUISH is an act to be considered and praised. I wouldn’t trade my vinyl copy of the album, for anything – it‘s that good. Utterly recommended! 9/10 UHF

9/10 Epic Storm
**Please support the underground! It’s vital to the future of our genre.
#supporttheunderground
Used by permission. © 2018 by Emil Chiru / UHF