Byyrth – Echoes from the Seven Caves of Blood

A scream emerges, among the ruins of a tomb lost in time, dying between echoes and the sudden loss of temporal notion soaked in reverb of the most underground and abysmal raw black metal. The sharp fangs come out again at night, every time the sun of California is hidden, by the hand of Byyrth, a duo who began his nocturnal walks just two years ago. His discography barely has a demo, the album “Saviors of Armageddon”, released last year and this brand new “Echoes from the Seven Caves of Blood”.

The first thing that hits us hard, when listening to “Echoes …”, are the cavernous chords and the reverb submerged vocals characteristic of the most reverential raw black metal towards the French scene. Drums almost inaudible in the mix, creepy shrieks and the constant putrefactive aura of the production, which gives that feeling of listening to something recorded in a humid crypt at midnight. The influences are quite clear, tending towards the classical occult excursions of Les Légions Noires (there are reminiscences of Vlad Tepes, Belkètre or Mütiilation, for example, although also to the Raw BM of more recent projects, such as Obskuritatem, of Bosnia and Herzegovina). 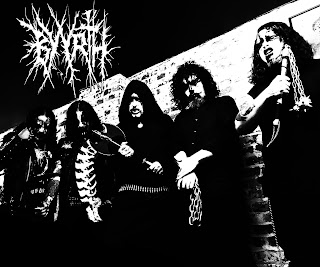 It is not by chance that the work has a very special guest: Meyhna’ch, better known as Mütiilation, who lends his voice to two of the album’s tracks. Particularly those where the band reaches its most insane and cacophonous level. The other songs are developed between structures of straight black metal, and some interesting incursions into rhythms more linked to black’n’roll, with many bad vibes and punk attitude. It seems to me that it is in these moments where the band manages to stand out and offer something away from the most trite places of the genre.

“Echoes from the Seven Caves of Blood” is a work that meets expectations within the canons of raw black metal, which has a certain personality and has a legend of extreme music as a guest, but also shows a band trying to develop stylistically, that executes several ideas with remarkable fruition, but without achieving a total cohesion in its proposal. Undoubtedly, an album that will satisfy the most hardcore fans of the genre, and recommended for the nostalgic fans of Les Légions Noires and the good old Meyhna’ch. 6.5/10 Sergio

6/10 – We may survive
**Please support the underground! It’s vital to the future of our genre.
#supporttheunderground