Wormlight – Wrath of the Wilds

Wormilight began as Unhallowed in 2014, but soon after that rebranded, including name, lyrical orientation and inspiration, as well as members. Now with Tiamat Invictuz on guitar and vocals and King Antichrist on drums from the original line up, as well as of course Lord Arktos (bass) and Lator Mortis (guitar), with two EPs behind and overcame all the changes, the band is stronger than ever. This resulted in the just released “Wrath of the Wilds” – a brand new wild full-length album with so much wrath and energy. A mayhemic one. A passionate one. A very inspired black metal. A huge burning pyre on the ice of the Northern vastlands. Intensive. Taking one’s breath.

Compared to their previous efforts, the material in “Wrath of the Wild” is big step onwards in terms of composing and in terms of lyrics approach. Once being an antichrist oriented, now Wormlight turns much more to the Scandinavian mythology and this can be sensed in the melody of the tracks, as well as naturally into the lyrics. With Tiamat Invictus being responsible for all the music and the lines on this record, his personal tastes and influences are clearly displayed and incorporated into the bands artistry. 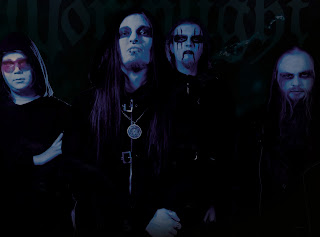 Ice cold and fiery at the same time, with 9 tracks with a total running time of crushing 55 minutes, this debut is an absolute celebration for all the fans of the Scandinavian black metal, as well as the new waves and bands. Very well structured songs, meaningful and long enough to feed the hunger for black metal. Energetic drumming turning into blasts, melodic solos all the time, fast tremolo pickings, open to palmed chords and riffs. Vocals are surprisingly good too – from the typical black metal, tenebrous screams and shrieks to death metal growls. My favorite tracks – the opener “Wrath of the Wild”, then “The Ghostlight’s dance”, “On Tattered Wings” and of course the absolute culmination of the album – “Nightmare”.

“Wrath of the Wild” is a very deep record, very enjoyable, melodic yet extreme, easily taking over the listener. It has its own cold atmosphere but carrying an explosive load. A black metal to really appreciate, bringing fire in the eyes and a faster heartbeat. “Wrath of the Wild” has own soul and direction. It definitely could be ranked among the finest black metal records of 2018. Highly recommended. 8/10 Count Vlad

8/10 To Greatness and Glory
**Please support the underground! It’s vital to the future of our genre.
#supporttheunderground

Inherits The Void – Monolith of Light