Sanhedrin – A Funeral For The World

I’ve missed the opportunity on writing a review at the time of the original release of this album, September 8th 2017. Shortly after it’s independent release, the album became part of my regular rotation list, where it remains to this day. With much excitement, I’ve learned a couple of months back, that the album will be reissued by the Italian heavy metal label Cruz Del Sur Music, and re-released on April 27, 2018 (May 4, 2018 North America), after the label signed the band in February. The reissuing re-opened the opportunity of reviewing the album. 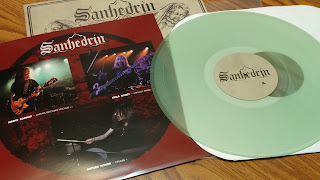 SANHEDRIN, formed in New York back in 2015. The trio’s lineup, unchanged since formation: Erica Stoltz (Lost Goat, Amber Asylum) – vocals/bass, Jeremy Sosville (Black Anvil) – guitars, and Nathan Honor (Vermefug) – drums, recorded and released a well-received demo tape, at the end of 2015. After extensively touring in 2016, the band entered Menegroth Studios (Queens, NY) to record their independently released, highly acclaimed debut album, “A Funeral For The World”, in the fall of 2017. 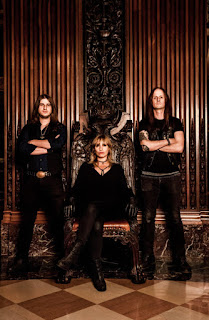 In the most recent years, a certain trend of capitalizing on the old-school styles, sound and vibe has been clearly present in the metal underground. Personally, I fully and enthusiastically embraced this “return to roots” movement. The aforementioned trend is clearly perceptible in SANHEDRIN’s latest production, “A Funeral For The World” – firmly anchored into the hard & heavy of the seventies, emanating epic doom and heavy metal dispositions, with a perfect splash of east coast speed metal thrown in the mix. This is not a dated record, but rather an intricate embroidery of alluring melodies and memorable lyrics! An absolute amalgam of hard & heavy styles, revealed via a very organic sounding production, an analogue first class experience, showcasing the real talent of the three musicians involved – their skills and originality! Erica’s vocal range and delivery complements perfectly Jeremy’s imposing, strong and creative guitar works, and Nathan’s flawless drumming – which combined with Erica’s righteous bass dexterity, makes for one hell of a dynamic rhythm section. The band’s approach to lyrics is praiseworthy as well: eloquent content about inner struggle, mortality and current social issues (climate change, religion, etc). Responsible for the albums production and engineering is Colin Marston, the mastermind at Menegroth Studios, a venerable music producer and also a very qualified musician himself. Mastered by Brad Boatright (himself a musician, engineer & producer) at Audiosiege Media in Portland. The production and sound quality of this release is immediately evident. I was pleasantly surprised to find out that the download accompanying the physical media (via bandcamp ), was also available in high-resolution digital (at 24Bit/96kHz). SANHEDRIN are hard at work writing the next record, aiming to release in the early 2019, on Cruz Del Sur.

SANHEDRIN’s “A Funeral For The World” is more than an album – it is a timeless statement that heavy metal is alive, well and thriving! Highly recommend. 8.5/10 UHF

Ævangelist – Matricide in The Temple of Omega