My insatiable thirst to identify and support the crème de la crème of newer Thrash Metal bands is at a fever pitch! Reviewing fantastic bands the likes of Terrifier, Objector, Conjurer and more, I’m truly starting to gain confidence that despite the imminent loss of stalwart bands such as Slayer, the up and coming crop of thrashers continue to improve…And we just may be in good hands after all.

In 2016 Defiatory released their debut album “Extinct” which certainly had a very raw Bay Area Thrash feel to it; but with a more modern approach in the mold of recent releases from Testament and Exodus. Although the genres faithful were impressed, the album honestly was overlooked by most. 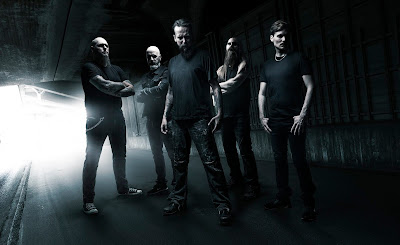 Which leads us to “Hades Rising” a recording that doesn’t loose it’s highly influenced riffing from the debut release, but adds a fresh coat of spit, fire and polish to their already impressive sound and vocals! This my friends is not to be overlooked, as the band takes in this reviewers opinion a major leap forward. Much of Martin Runnzell‘s vocal style is nestled somewhere between Nick Melissourgos from Suicidal Angels and Tom Araya, just listen to the familiarity on ‘Death Takes Us All’. But it’s the furious riffage that truly bares comparison to the Bay Area Thrash Scene of days gone by. Ludvig Johansson and Ronnie Björnström making the Masters of the Thrash Universe incredibly proud with their true to form performances on tracks such as ‘In Hell’ ‘Dance of the Dead’ and ‘Down to His Kingdom’ just to name a few standout renditions from the duo. Their old-school fueled and relentless approach from the debut is still rampant throughout, but with a bit more variety to their delivery and execution on “Hades Rising”. Making for a more varied experience from beginning to the end of the album. Perhaps my only issue with the first two releases is the bands apparent lack of variety in style and substance does exist. 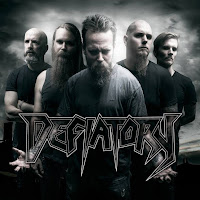 But it’s really where tracks like ‘Morningstar’ and ‘Bane of Creation’ unveil a fresh and distinctive approach that the album truly strikes a nerve! Even the sinister intro and delivery to the crunchy ‘King in Yellow’ is another example of this advancement. This formula may be a real opportunity for Defiatory to significantly advance their sound and differentiate themselves next time around. As those standout performances along with ‘In Hell’ and the vicious title track kept me coming back for more and more of “Hades Rising”. So if you like your thrash in modern times where clean sound, vocals and production are so prevalent, but you yearn for the raw 80’s and early 90’s formula then Defiatory is the band for you! Perhaps becoming almost too clean for this reviewer on one hand…Maybe? But honestly this is truly an excellent all-around album that should quickly make its way on to your playlists and whatever listening format you prefer.Highly recommended for fans of Evile, Vader & Suicidal Angels with obvious Bay Area Thrash and Testament Riff Worship throughout! Hail to the King! 8.5/10 Mö