Filii Nigrantium Infernalium (referred to as FNI for simplicity) are well known in the home county’s underground scene, formed in 1992 from the ashes of Batcherion and a reshuffling of band members decided upon by Belathauzer. They have four full length albums, a few EP’s to their back catalogue and the curious claim to fame of participating in the adult film Phallusifer – The Immoral Code [NSFW], billed as the world’s first black metal porn movie.  For the most part in mainstream metal circles they are completely unknown, but such things are frivolous minutae as increasing fame often leads to a dilution of their music and art.

First of all, FNI’s ‘Fellatrix’ is a reworking of the demo album ‘Fellatrix Discordia Pantokrator’ released in 2005, something that clearly bothered Belathuzer as it appears (on the basis of the press release) he wasn’t entirely happy with the original recording and that it had much more to deliver. Clearly, FNI have been very busy as they’re due to unleash ‘Fellatrix’ onto the world; as well as the brand new studio album ‘Hóstia’ which is due on the same day:  Friday 25th May 2018 – to be released on CD and limited edition cassette and vinyl runs. 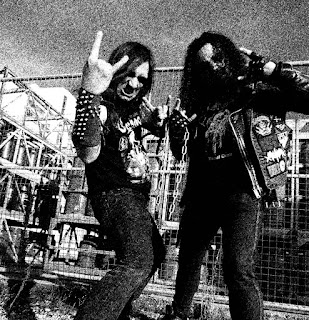 So, for those who haven’t encountered FNI before – what’s to be expected of them musically? A huge. unique sound of their own making that’s best be described as ‘Party Black Metal’. Imagine, if you will – your neighbours are Impaled Nazarene and Venom, who had a vodka and Columbian marching powder fuelled jam session; stimulated by a weeks worth of binge listening to Bathory, Sodom, Motorhead and Judas Priest with Varg Vikernes tripping his tits off on vocals.  Yes, dear readers – it sounds completely insane but works beautifully. ‘Calypso’ kicks in with huge overly indulgent guitar solos courtesy of Iron Fist and Belathauzer, and thrash metal inspired riffing that instantly drags the listener by the scruff of the neck and insists you to “Thrash it like it’s ‘86”; but at the same is typically black metal. ‘Bordel Vaticano’, and ‘Exos De Chaos’ opens with melodious guitars reminding the listener of what Skid Row would sound like if they came from a parralel universe where black metal supplemented hair metal and is distinctly “black and roll”; while the latter track goes for a distinctly thrash flavoured attack, with Belathauzer’s shrieking pipes sounding like a deranged madman over the top of a delicious slice of noise. The rest of the album is extremely top notch, continuing on with a mostly thrash-centric black metal attack, giving nostalgic nods to the influences outlined earlier while the bass guitar work of Helregini and the drums of Maalm add as the perfect underpinnings to a glorious wall of noise.

Usually, reboots are a cynical ploy for the band to cash in on long-deleted albums and often dismissed as ‘money for old rope’, while they’re remastered to an inch of their lives and polished beyond all recognition. A ham fisted producer mashes his meat paws on the mixing desk, hosting everything up to 11 in the empty fallacy of ‘louder is better’ – for tone deaf root vegetables listening to terrible freebie earbuds plumbed into their smartphones.  Not so in the case of F. Matias who produced this album, as the re-recording adds a much needed dimension that the original didn’t have – breathing renewed life into the album. The guitars are fleshed out, with crisp drumming, and clearly defined vocal and bass parts. Therefore, the original objective of the album is restored for existing and new fans – that would’ve otherwise been left as a curious footnote in extreme metal history. A band worthy of far more recognition, in an otherwise ignorant world. 7/10 Goth Mark