Back with a new full-length and their sixth album to date, along with some past splits, Eps and demos as well, Cardiac Arrest are doing what they do best. Having discovered this band, years ago and lucky to see them live when they played in Canada a few years back, I originally heard out their past album “Cadaverous Presence” and have followed them since. The impact that album made, with its catchy, heavy riffing and reflecting on an early 1990’s influenced death metal style, had me instantly hooked 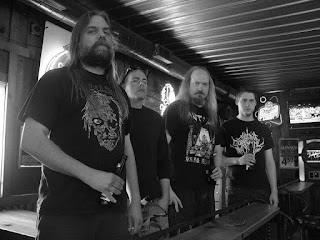 ! Now, after hearing this new release for 2018  “A Parallel Dimension of Despair”, it certainly brought back more of the past influences with elements of old school death metal and grindcore and topping it all off with a superior, beefy production to go with it all too! Continuing on with their heavy, horror themed, old school death metal traditions, each track after the other, just pummels and draws one in, with a combination hooks, groove and sometimes, all out fast-blasting parts, for total head banging madness.

For example, the first track titled “Immoral and Absurd” begins in an introductory style, building up upon itself as the volume and intensity increases, until a drum roll hits and all instruments let loose, driving all into a classic mid-paced tempo of death metal rage. Track five “When Murder is Justified, is an example of hooks and some slower groove parts with its very catchy beginning and heavy chugging riffs, while monstrous vocals roar over top, solidifying this death metal beast. Overall, there is not one bad or off kind of song here. All the songs are well written and cover the elements of catchy, heavy riffing, while varying tempos occur within the songs for the most part through out.
“A Parallel Dimension of Despair” by Cardiac Arrest is their best one yet and keeps traditional, old school death metal on the map to say, this is how its done! 10/10 Wolven Deadsoul

10/10 Immortal Classic
**Please support the underground, it is vital to the future of our genre
#supporttheunderground

Nattravnen – Kult Of The Raven

Verbal Razors – By Thunder and Lightning