Full of Hell is one of the most extreme young bands that music has given in recent times. Owners of a unique style, in which classic influences from Grindcore and Powerviolence join sludge, noise and even Power Electronics structures, with the sole idea of creating a high combustion amalgam capable of melting brains and producing hypoacusical damage. With the band immersed in a marathon tour, we have the honor to exchange some words with Dylan Walker, vocalist of the band and author of abrasive noise, where he tells us some great news about the future of the band and gives some advice to those who were able to witness Full of Hell live and they became deaf.

Dylan, how are you? It’s a pleasure to be doing this interview with you. Tell us, how do you start in this? Before Full of Hell did you have other bands?
Our guitarist Spencer started full of Hell. We had all been in bands before this but had never put out a real record or anything, so this was and is our first serious project. We simply wanted to start a band that played the exact kind of music we wanted to hear and we wanted to tour as much as possible.

Full of Hell is usually a band typecast in the genres Grindcore or Powerviolence. But there are many other styles that usually identify you. Noise, Doom, Sludge … The amount of extreme genres seems to be endless in your mix. How would you define yourself? Within what style do you feel most identified?

We definitely don’t define ourselves as a PV band at all. We love the style and take influence from it but it was never a label we used. We try to be casual about the genre labeling though. We don’t care what label people put on us, especially because no matter what genre you’re tagged with there will be people angry that you’re being labeled as such. It doesn’t matter. We are a band.

What bands or artists do you think were essential to influence you to make this music?
It usually comes down to bands like The Endless Blockade, Gasp, Man is the Bastard/Noise, Swans, Napalm Death and bands of that style. Obviously, as years go by we bring new elements into the sound. It’s good to grow!

I think that, currently, Full of Hell is one of the most energetic bands of extreme music, playing live. It must be tremendously exhausting. How do you live with being on tour and having to interpret music in this way? What is the secret?
We don’t try to play any specific kind of way. We just react as we want to and play with passion. I don’t think we are that crazy in the big scheme of crazy bands, but it’s nice to hear that some think we are energetic at least. 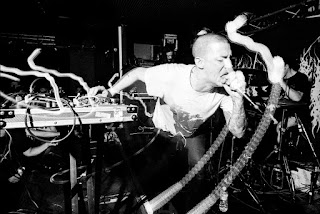 If you had to tell us which is the most extreme, caustic and heavy album of Full of Hell, what would it be and why?
Trumpeting Ecstasy, simply because I feel like it’s the furthest recorded example of what we want to sound like and I am most proud of that album.

One of the great milestones of your career was having recorded with Merzbow. How did you meet him?
We met Balazs Pandi in NYC years ago, he plays drums with Masami live. We became fast friends and he suggested the idea to Masami, who was very interested in it. It was all very simple and organic. No pressure, no guidelines. He is an amazing person.

How was the recording process of “Full of Hell & Merzbow”? Did you remember any anecdote in particular?
It was difficult for us because it was new territory. We had big shoes to fill and weren’t sure what to expect. We are content with the end result though.

What advice would you give to people who went to see Full of Hell live, and was left with totally screwed ears?

Buy earplugs and suck it up. Or go listen to folk music instead. (Lol)

What are the next steps of the band? Do you want to tell us something about a future project?
We just want to keep progressing and making records. We have a lot left to say. We are going to keep touring and doing just that. The new LP is almost done, so that’s the next thing we will be recording.

Is there something you want to tell someone who has never heard Full of Hell and is now reading this interview?
Listen to GASP. Dylan, thank you very much for your kindness. I hope you continue to have the success you deserve. I wish you all the best in life. I send you a big greeting. Thank you very much!