Shrine of the Serpent – Entropic Disillusion

“Entropic disillusion” begins with a chord that immediately drags us into a world of misery and desolation. The rottenness of daily life is shattered swiftly, taking every fibre of our being through an endless culvert. How could it be otherwise, again we are facing a launch from Oregon, a place that, little by little, is becoming the Finnish epicentre of the new millennium (If we take into account the number of Doom bands that are taking over the scene).

Shrine of the Serpent is a relatively new band, with only one EP and a split edited before “Entropic …”, its first long-duration. What do we have in our hands? A collection of monoliths in tune with the old Death / Doom of the old school, corrosive, sharp and extremely slow and atmospheric.

Undoubtedly, the most positive characteristic of the band is the tone and sound textures acquired during the agonizing course of these compositions. The guitars steal the show, showing implacability and insane density, placing themselves within the most crunchy and Scandinavian Death spectrum. Imagine Entombed trying to play Worship songs. 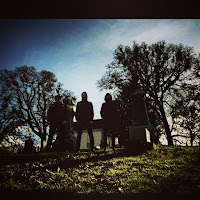 The compositions are long (most of them are between 8 and 10 minutes long) and the trip translates into an endless nightmare lasting almost an hour.

I think there are two very marked factors that identify work. While all the songs are caricatured for being too slow, the first half shows a glimpse of the band to be fully shown as a Death/Doom band. This is something that then begins to blur a little, showing a facet more located within the Funeral Doom, maintaining its more extreme aspect, by the way.

It is in this dichotomy that the group begins to show some flaws in the compositional department. Given the lack of riffs, the compositions begin to stand alone in successions of chords, but flooding the entire proposal with some monotony.

Undoubtedly, Shrine of the Serpent is a band that shows great potential in the technical aspect, with a great naturalness to find an identifying sound, but that is torn between being a Death/Doom or Funeral entity. At no time I feel that the two spectra achieve cohesion as in, for example, the classic band Asunder. Maybe in future releases, the compositional aspect will be taken into account to achieve a certain dynamism and cohesion of ideas that, although very good, still do not manage to amalgamate to be placed in a panorama already very well explored by heavyweights of these magnificent genres. Anyway, I would not hesitate to ask all Doom lovers to listen to “Entropic Disillusion”, even once. 6/10 Sergio

**Please support the underground, it is vital to the future of our genre
#supporttheunderground

THE RIFFS MUST FLOW – V