On a daily basis, we Blessed Altar denizens peddle the life-giving properties of metal, like deranged drug salesmen.  Escapism gets a bad rap, I think.  Our view is that metal is a healthy response to pretty much anything life throws at you: it imparts strength to the disheartened, illuminates dullened senses, lights a fire under the imagination.  But what happens when a band releases an album that is that is the very opposite of escapism?  I’ll tell you: all vocabulary falls away (which isn’t very useful if you need to tell people about it).  The imagination is cowed and humbled and realises it talks bollocks most of the time.  It’s easy to talk about tits-n-wizards metal, or the dozens of new death metal records that come out every month with almost exactly the same torture chamber cover art.  But in the case of the new 1914 album, The Blind Leading the Blind, the gore is real, and it’s not very funny.  It’s actually the subject of one of the most important releases of the year.

The Ukrainian ‘trenchcore’ band formed in the summer of 2014 – poetically, on the hundredth anniversary of the start of the Great War. WWI fanatic Ditmar Kumar’s proposition of a sludge/black metal band themed around the war was humoured by the musician friends in Lviv he reached out to, and the rest – as they quite correctly say in this case – is history.  The Blind… is their second full-length following 2015’s well-received Eschatology of War, and was released yesterday – 11am on 11 November, the centenary of the moment when artillery activity gave way to an eerie stillness and birdsong as the Armistice took effect.

The main substance of the album is book-ended, as it was on the previous campaign, by two propagandic songs of the period, renamed to ‘War In’ and ‘War Out.’  What takes place in between is everything you need to know about this tragic juxtaposition between the war as it was portrayed back home (the ‘merry duelling party on flowered, blood-bedewed meadows’ – Ernst Jünger), and how it was seen from the trenches.  ‘Oh we don’t want to lose you / But we think you ought to go / For your King and your Country / Both need you so..’  A crackling 1914 recording of singer Helen Clark’s shrill voice jollying men along to their deaths is answered viciously on the next track. ‘Arrival. The Meuse-Argonne’ is a first-person retelling of the story of the American ‘Lost Battalion’ and their ordeal in the Argonne Forest, not only surrounded by the Germans but also subject to friendly fire as the result of communications going fatally wrong.  What an opener and tour de force of the genres they show over the course of 11 tracks that they are already, this early into the band’s life, masters of: frenetic blackened death giving way to straight-up black metal passages, with an immobilising doom section lyrically comprising of an actual message sent in desperation via carrier pigeon by the American companies being blown apart by their own shells.

This is an album with no embellishments, musically or otherwise: there is no politicising, and – while surely this must be done elsewhere – it is all the more effective for it. The clips from ‘All Quiet on the Western Front’ and ‘Paths of Glory’ are not inserted for entertainment purposes.  We’re at school here.  The sorrowful bagpipes of the ‘Flowers of the Forest’ lament are placed at the intro to one of the album’s most ferocious and standout tracks, a blackened interpretation of The Exploited’s ‘Beat the Bastards,’ with no comment: it’s not needed.  Sometimes putting one thing beside another shines a light on both.  Time and again on this album the band prove that their theme is not a gimmick.  Underlying it all is an archaeological attention to detail and a burning drive to spread the gospel of the stories of the slain.

One of the most unnerving examples of their stark approach to lyrics is ‘A7V Mephisto,’ set to a pace as slow and trundling as the German tank of ill repute itself.  Based on the story of the tank’s brief career at the Second Battle of Villers-Bretonneux, the verses are made up of a low, rumbling litany of technical specifications.  Perhaps it’s just the effect of the coupling of this vocal style with the concept that makes this track particularly devastating, but I think it’s more likely to be the particular charism the frontman possesses for total vocal devastation.  His is the voice of ruination, of mud gurgling in a shell-hole, about as clean as a motion-sick gunner’s vomit splattered up the inside of the crew compartment.  This monster of a tank, this ‘iron coffin’ – ‘30 tonnes of useless metal’ – was abandoned by its crew after becoming stuck in a ditch: the sad mechanical squeaking of its tracks is replicated here.

The album’s not without melody, it’s just that it’s so fucking sad. Examples might be the chorus of ‘High Wood. 75 Acres of Hell,’ which would almost be rousing if we didn’t know that what we’re being roused to is the ‘hell where youth and laughter go’ (Sassoon).  There is also the inharmonious violin on ‘Passchenhell’ (listening to this again reminds me – as an aside – of what an absolute brute drummer Rusty Potoplacht is) – a track that also features the apt and powerful inclusion of Dave Ingram of Bolt Thrower (a band influence), Benediction and more.  It is an interesting piece of trivia that Ingram was once the vocalist of the Dutch death metal band Hail of Bullets, whose material was about the Second World War.  ‘Passchenhell’ is easily one of the record’s most moving tracks, especially as it dissolves into an acoustic ending set to the sound of sheets of falling rain and a sad wartime recording of the song ‘We’re Here Because We’re Here.’  Did those serving really fight with the tangible feeling of purpose and sacrifice we need to believe they did?  I don’t know.  The song’s inclusion could well be a comment – equally, it could not.  We are left alone with our thoughts.

After some serious riffage as ever from Liam Fessen and Vitalis Winkelhock on the spiteful ‘Stoßtrupp’ (‘close your mouth /  reload your gun / get a grip’) we arrive at ‘The Hundred Days Offensive,’ which opens with the moving monologue from ‘All Quiet on the Western Front.’  A young German soldier stares into the face of the Frenchman he’s just killed and begs for forgiveness: “You see, when you jumped in here you were my enemy, and I was afraid of you. But you’re just a man like me, and I killed you. Forgive me, comrade.”  Again with the understated melody that then crashes in: it might be buried deep inside concrete riffs, but it’s as powerful as a nightmare you can’t recall and leaves you inexplicably grief-stricken.  Appropriately there is a real sense of crescendo thanks to the evocative leads – a feeling of finality – and any additional tracks after this (surely a track of the year) would be overkill.  You surrender.  All that’s left is ‘War Out’: Oscar Seagle’s jaunty fucking ‘Pack Up Your Troubles in Your Old Kit Bag (And Smile, Smile, Smile)’ feels like a joke after what you’ve just vicariously gone through.  It’s the kind of irony that caused the anti-war poet Wilfred Owen to pick up his pen and write his own caustic response.  ‘This war has begun in darkness and it will end in silence,’ wrote Evelyn Waugh in Men at Arms.  Much more trivially, every album ends in silence – obviously – but the silence I’m left with after this album will be a lasting one that I’ll carry within me.  The Blind Leading the Blind is not only an objectively great record, but it is mandatory listening for all who wish to make a meaningful act of remembrance.  Classily done.  10/10.  Grim Princess.

10/10 Immortal classic
**Please support the underground! It’s vital to the future of our genre.
#WeAreBlessedAltarZine
#TheZineSupportingTheUnderground 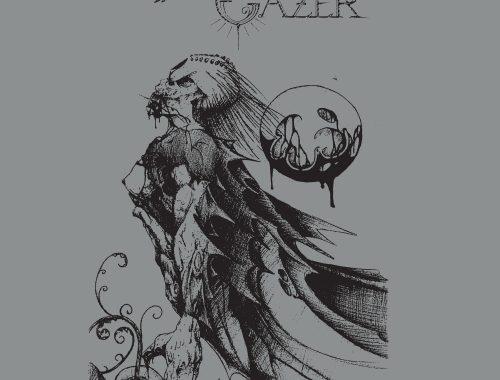 I caught up with vocalist Julien Truchan, who took

Each song seems to pinpoint a mood, uplifting joyo