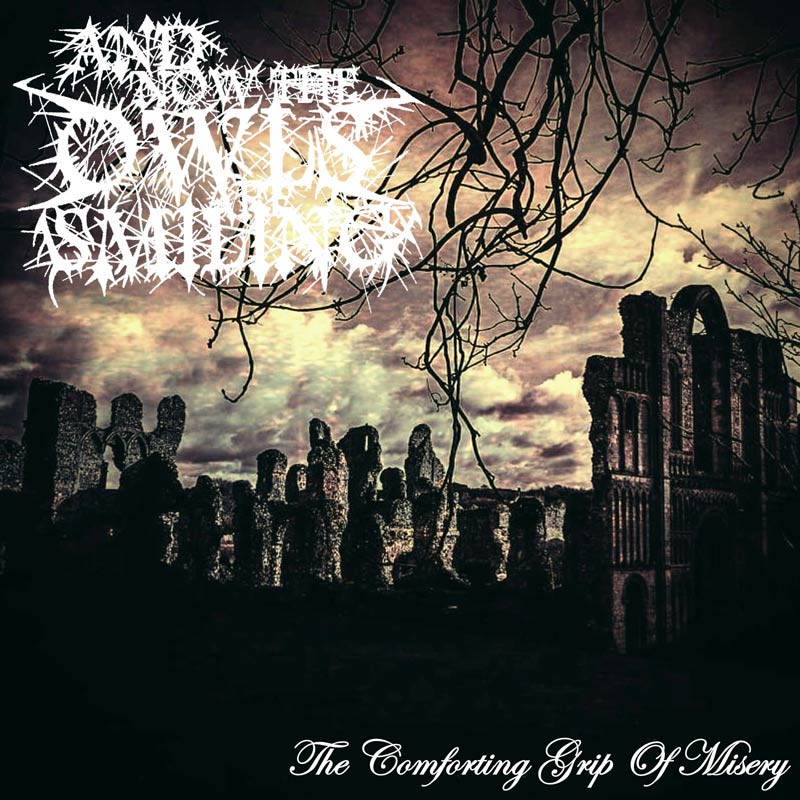 And Now The Owls Are Smiling – The Comforting Grip of Misery

I have to admit when I first saw the name of the band AND NOW THE OWLS ARE SMILING I sort of had a sneaky suspicion that I had some sort of new nature metal on my hands. However the album title as well as the track names pointed towards something else and eventually I found out it was actually atmospheric black metal. Which is fine? These days it’s extremely dark and cold here in Scandinavia so it was well fitting.

“The Comforting Grip of Misery” released about a month ago on the 1st of November, following up with the debut album “Desolation” released last year. This band is one of those one-man projects with Nre on all instruments as well as vocals. The seven-track album ties up in barely 45 minutes, and appears to revolve around depression, suicides and coldness.

“Our Forest Calls Me Home” starts off the depression quite forward and strong in kind of slow motion. Ambient guitars fill the sound but as it goes on I couldn’t help but question the production. A rainy sound which has been present from the beginning is the main star of the middle section before it all starts up again and clocks in at almost 8 minutes. Quite the long track, which for me most of the time does not sit well. The melancholic intro goodness however of “And Indictment” somewhat made up for it, but the slow motion notion is still there and it even takes almost a whole minute for the guitar to merely fade out. Depression and despair ties the two first tracks together, and since both of them clock in at around 8 minutes I was happy to move on.

So far the album title track “The Comforting Grip of Misery” leads the way in enjoyment. It’s not far ahead of the previous tracks but the melodic guitars are somewhat nice to hear. The female vocals of “Winter´s Elegy” fall in the same category. It’s nice.

“An Empyreal Spirit Dances” before Me has a certain stand out point in its insanely piercing sound of the computerized crash cymbal, but none the less we have here what appears to be the same replication as we had before. It’s not insanely boring to listen to, but I can’t help but feel that with better production there could have been more to this.

Hope appears to ignite a tiny spark within “The Hollowness of Existence”. Although the music, the lyrics and the track name don’t exactly encourage hope, there vocals are mixed with a choir sound that lightened my spirits at least. This is the fourth track out of seven clocking it at around 8 minutes, and that is definitely a no go for me.

The closing track “Betarachtungen” sounds like a short beginner’s song on an acoustic guitar. It is in no way flat or crappy, and since less can be more, this track is a welcoming one after the previous six . It can’t save the album on its own, but with the sort of effect this track brings I feel it should have been in the middle of the album somewhere.

As atmospheric metal I’m sure this album will work great for those who enjoy that genre in particular. It does have that gloomy feel, depression is strong and despair is not something that it lacks. Surely some will go bonkers over it, but the production could surely be better and the sound more polished. While well-fitting as depressive and suicidal, it lacks in diversity and is rather unmemorable. 5/10 Julia

5/10 Floating in the sea of mediocrity
**Please support the underground! It’s vital to the future of our genre.**
#WeAreBlessedAltarZine
#TheZineSupportingTheUnderground