So, we reach the penultimate edition. The Eleventh month of what can only be described as a “good-fkn-riddance” year, is finally upon us. Lucky we’ve had mountains of riffs bestowed upon us this year, perhaps the only thing that has kept us sane as we meander our way through this C-19 bullshit. Thank Old Nick for the Metal! BUT, we are not done just yet! If you think your EOY lists are just about set, I’d hold off for just a little longer because November is about to drop some hefty hammers! Read on to find out more! As always, thanks for taking the time to read and dissect your choices. Until December! Ride!

Sólstafir music penetrates the mind, body, and soul. One does not need to speak their Icelandic tongue to understand the spectrum of raw emotion evoked by every song. ‘Endless Twilight of Codependent Love’ further solidifies the Icelandic rock giants’ place as masters of their craft, delivering their signature elegance and unbridled passion upon which they’ve built their career. While a clear evolution, Sólstafir also pays homage to their metallic roots. Much like the vast expanse of their homeland, the band once again embodies the ever-turning wheel of the four seasons with their shifting light and darkness. (From Bio)

Christ, do they really need any introduction. It’s Fates Warning. The absolute black belt masters of US Progressive Metal. Long Day, Good Night is album number 13. It’s a no brainer purchase for any fan of the bands latter period. Expansive, expressive, captivating and loaded with Jim Matheos genius. The the best produced and mixed album I’ve ever heard from them. Joey Vera is especially prominent. Essential.

The new follow up – Ex Rosa Ceremonia, with cover art featuring a photo by Brian Sheehan/LGRDMN, conceptually refers to a need for a mental and spiritual renaissance. Looking back throughout history, there have been movements that inspired and created many metaphysical systems and philosophies that, upon deeper inspection, led us forward as a species in many ways, though hidden behind the curtain of magical order and secret society. (From Bio)

It was but November of last year when MEGATON SWORD unleashed their glorious debut EP, Niralet, via DYING VICTIMS. Arriving fully formed, virtually without warning – no prior demo recordings existed, at least not publicly – this Swiss quartet evinced an ages-old sound that was wise (and wizened) well beyond their young years. Already, MEGATON SWORD knew the mystery of steel…and wielded it with a startling confidence. And no one knew just how high they could fly, only that they were just getting started.

Now, with the arrival of their imminent debut album, Blood Hails Steel – Steel Hails Fire, MEGATON SWORD are marching into the halls of greatness, with no one to stop them. Retaining the same, well-named lineup – vocalist Uzzy Unchained, guitarist Chris the Axe, bassist Simon the Sorcerer, and drummer Dan Thundersteel – MEGATON SWORD maximize the strengths of the EP and then some, revealing new twists to that mystery of steel whilst retaining the charisma and crunch that endeared them to the true-metal underground the first time around. (From Bio)

The new album from death metal outfit OF FEATHER AND BONE, “Sulfuric Disintegration” (out on CD/LP/Digital Nov 13), sees the Colorado power-trio deliver their most brutal, dynamic, and punishing album to date. Following up 2018’s “Bestial Hymns Of Perversion”, an album which signaled a new paradigm shift for the band and saw the band get the worthwhile recognition deserved through acclaim and notable touring cycles (the band being recognized for their devastating live performance), bringing a new sense of awareness to the band. “Sulfuric Disintegration” takes OF FEATHER AND BONE’s intensity and aura to the next level. Produced, mixed and mastered by Arthur Rizk the sound on “Sulfuric Disintegration” is more devastating than anything done previously. (From Bio)

More than 30 years after its inception thrash refuses to die, and with Australia’s Harlott stoking the fires the genre is in very good hands. Returning with the follow up to 2017’s mighty Extinction, Detritus Of The Final Age sees them continuing to fight the good fight, delivering a collection of serrated riffs, rampant rhythmic battery and bilious lyrics, hitting hard in all the right places. The result is perhaps the band’s most dynamic release, while holding on tight to that signature Harlott sound that has drawn in a legion of fans from around the world. Helping to realize the new record, the band’s ranks were refreshed with two new members, Glen Trayhern on drums and Leigh Bartley on guitar. The result is “thrash metal with a bit of darkness, a bit of sorrow, a bit of melody and a few hooks thrown in for good measure,” something that Harlott fans will recognize while surely drawing in new listeners. (From Bio)

At long last, OMEGAVORTEX reveal their long-awaited first full-length, appropriately titled Black Abomination Spawn. Relentless, devastating, aggressive, lightning-fast, oppressive, earth-shattering: all these adjectives apply here, with perhaps the most apt phrase being “eviscerating the firmament.” Verily, OMEGAVORTEX are rooted in the ancient alchemy of vintage black/death, drawing equally from the likes of Necrovore, Altars of Madness-era Morbid Angel, Florida’s Incubus, Possessed, Repulsion, Sadistik Exekution, Profanatica, and classic Sarcofago, but sounding like none of them; indeed, their abominations of desolation are entirely their own. As such, their songwriting takes on a tendrilous aspect, enrapturing the listener in unshakeable, irrevocable oblivion – but clearly with a destination in sight. The blackest cosmic abyss…guided by eerily hummable, malevolent melody (From Bio)

Their second album titled ‘The Negationist’ where darkness and hope merge in an introspective trip marked by the damage we are doing to our own planet and how this is affecting us severely. This album has been mixed and produced by Miquel A. Riutort (Mega) (The Unity, Cryptosy, The Agonist, Vltimas) at Psychosomatic Recording Studio and mastered by Dan Swano at Unisound Studios. The cover artwork has been done by Juanjo Castellano Rosado (The Black Dahlia Murder, Gates of Ishtar, Trident). Heads up, watch out for an interview, soon!!

Can you believe this? Some 31 years after their inception, Swedish Old School Death Metal act Toxaemia are about to drop their debut album. Toxaemia was formed by longtime friends Pontus Cervin, Emil Norrman and Stevo Bolgakov. It all began with a desire to play the music we loved to listen to – Death Metal – Swedish Style! Let me name drop – Entombed/Grave/Dismember. That enough for you? Based on 2 tracks I’ve heard, a serious contender for Death Metal album of 2020.

Album No.12 from the Swedish Melodeath stalwarts! It’s been four years since DARK TRANQUILLITY’s Swedish Grammy-nominated album “Atoma”. But the time between was creative, innovative, and adventurous. The band welcomed two top-tier guitarists — Christopher Amott (ex-ARCH ENEMY) and Johan Reinholdz (NONEXIST) — while writing a stunning cluster of songs that not only push DARK TRANQUILLITY’s boundaries outward but also strongly typify the Swedes’ sonic fingerprint. Recorded at Nacksving Studios and Rogue Music by Martin Brändström and then mixed/mastered by Jens Bogren at Fascination Street Studios, “Moment” is a riveting yet challenging journey from start to finish. (From bio)

Here comes HORNCROWNED’s highly anticipated fifth album, Rex Exterminii (The Hand of the Opposer). A veritable institution in the South American extreme metal scene, for nearly 20 years have HORNCROWNED been crushing the competition with their remorselessly violent brand of bazooka-blasted black metal. Always eclipsing each prior recording whilst retaining their iron-fisted identity, the quartet continue their reign with album No.5 balancing their berzerk violence with an eerie melodicism that simply sharpens that attack to a masterful degree. (From Bio)

Revolting happens to be one of Rogga Johansson’s most prominent and long-running bands along with Paganizer. The band is also one of the most active ones. Fans will know that they’ve honed their craft over the years and they do things in a better way with each one. For the seventh full length, Rogga Johansson has done his best blending classic Swedish melodies with the brute force that his bands are associated with. Imagine a mix of Paganizer and Rogga Johansson and you’ve got something that has the best qualities of both the Swedish-sounding bands, which are presently at the peak of their respective careers. There’s of course the added groove and memorability that’s hard to dislike. All in all, if you’re a fan of well-rounded Swedish death metal that has everything in spades, Revolting is for you. FFO: Paganizer, Rogga Johansson, Entombed, Dismember, Edge of Sanity, Hypocrisy, Grave, Unleashed, early Tiamat. (From Bio)

POSSESSED STEEL are a four-piece traditional heavy metal band from Toronto, Canada. Formed in 2010, they started by playing small venues and house parties in the area, and through the years became more and more dedicated to finessing their sound and ideas. They released a five-song rehearsal recording that same year, and after a steady stream of shows, the band crystallized their sound on their self-titled EP in 2014. In 2020, their debut, Aedris, is finally unleashed. Musically, Aedris is a well-crafted, refreshing mix of epic heavy metal and Canadian-style progressive thrash with poignant vocals, sometimes soul-wrenching screams – but overall, it has incredible RIFFs, otherworldly acoustic parts (think Sacred Blade), and over-the-top solos. One thing that could be said about Aedris is that it is more than an album; it is entering another world. It makes us travel into a parallel universe. It sounds and feels original, and it is the type of record that we can listen to over and over again and discover new things every time. (from bio)

Carefully considered and selected by K-MaN 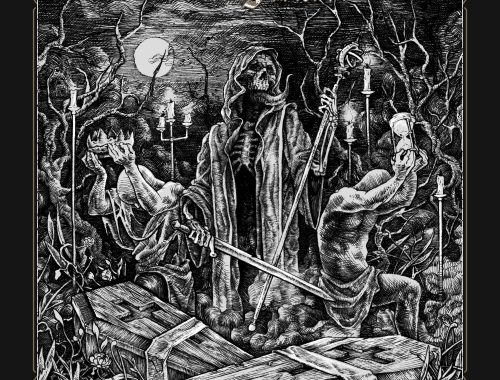 Abrahma – In Time for the Last Rays of Light

...proving to be not only one of the most interesting and creative musical projects operating... @NonServiamVoid2
🇫🇷 We Are Nothing But Your Krill Via #TrepanationRecordings
By @BoatmanTom
#WeAreBlessedAltarZine
#TheZineSupportingTheUnderground https://blessedaltarzine.com/2022/08/11/nonserviam-we-are-nothing-but-your-krill/