Ladies and gentlemen, strap yourselves in, for what we have here is quite a wild ride. Not the remorseless brutality of Technical Death Metal (though there are elements), nor the elaborate technicality of Progressive Metal, but something as challenging in its own way: Avantgarde Metal. And what more appropriate home for the creators of this strange brew than the label Avantgarde Music? “Imperative Imperceptible Impulse” (try saying that quickly ten times) is the second album of Italy’s Ad Nauseam, an album that you might want to sit down for, not really the right album to run to (I gave it a shot) and an album that some might feel is altogether a bit “too much”. I once read a review of a band where the writer said something like “if you don’t like this, you just don’t get it”, which I thought was just about the wankiest thing anyone could ever say. So I won’t say that, but let’s just say… this album is not for everyone. However, if you are in the mood for an explosive hour of jarring and dynamic Extreme Metal, you might just have a great time with this.

Album opener “Sub Specie Aeternitatis” perfectly represents what is to come from the rest of the album. At a mere 8:41 it’s the shortest track on the album (the longest of the six coming in at 12:06) and from the word go the guitars buzz discordantly and head-spinning drums come straight at you in a furious burst that may at first sound chaotic, but the more you listen, you can tune yourself into the overlapping rhythms.

Though the tempo is often fast, with the music often intentionally keeping you off balance, this isn’t necessarily the heaviest music around. Certainly its extreme and every track has some passages that can feel almost overwhelming, but there’s clearly an intellectual side to this music too. On their Bandcamp page the band state an influence of 20th century classical music. A couple of ways this shines through in the music are the occasional bursts of eerie strings, first appearing here on the opening track, and the structure of the songs that probably make more sense if you digest it as coming to you in movements rather than any kind of verse/ chorus approach.

I am absolutely not an authority on Classical Music and I don’t want this album (or review) to sound too pretentious, but to listen to, it makes sense that there should be some Classical influences at play here. Make no mistake though, what you will get for the most part with this album is a powerful battery of drums, guitars, bass and growled/ screamed Death Metal-style vocals, with a healthy dollop of weirdness, some periods of respite where you can take a breather and a pretty visceral sound to the album where you can really hear the instruments being struck, whether it’s the drums or the bass and guitar strings.

With each track not having your typical structures and some segueing into each other, it’s not always simple to identify which track is which, some standout sections though include: a passage towards the end of “Inexorably Ousted Sente” where the band creates an off-beat rhythm effect that creates the feeling of a record skipping, a dissonant, angular guitar arpeggio intro to “Coincidentia Oppositorum” (the longest and probably my favourite track on the album) that acts as a welcome breather before the band go on an all out raging assault again, and a cool, jazzy midtrack interlude to the otherwise brutalising “Horror Vacui”.

If you pushed me to give a Metal reference point to what this music sounds like, it’s probably somewhere in the landscape of later-period Gorguts, (there’s definitely a similarity in the dissonant guitar tone that sometimes sounds like a metallic swarm of bees), but to my ears this music isn’t shooting for the same level of brutality. For sure though the effect is at times incredibly intense and while it never gets boring, with the lengthy tracks, it can feel a bit relentless. This album is a compelling listening experience, but definitely not one that I want to have every day.

At the end of the day it’s hard to decide quite how to rate this. “Imperative Imperceptible Impulse” is an impressive construction of interweaving rhythms and often hyper-intense percussive batteries. This is not an album to casually have playing in the background; it’s a musical experience that does really demand your full-attention, but if you’re willing to give it the time and attention there’s a lot here to appreciate for fans of mind-bending Extreme Metal. 8/10 Tom Boatman

8/10 To Greatness and Glory!
**Please support the underground! It’s vital to the future of our genre.**
#WeAreBlessedAltarZine
#TheZineSupportingTheUnderground

Wolfheart – Constellation Of The Black Light

Skull Fist – Way of the Road 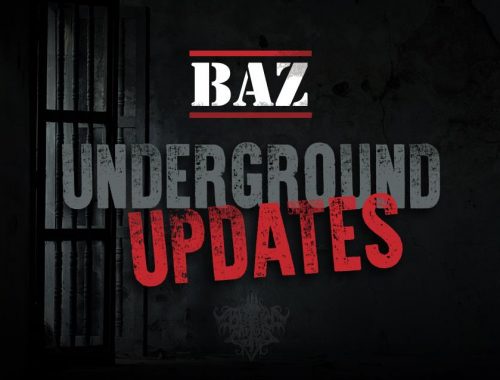